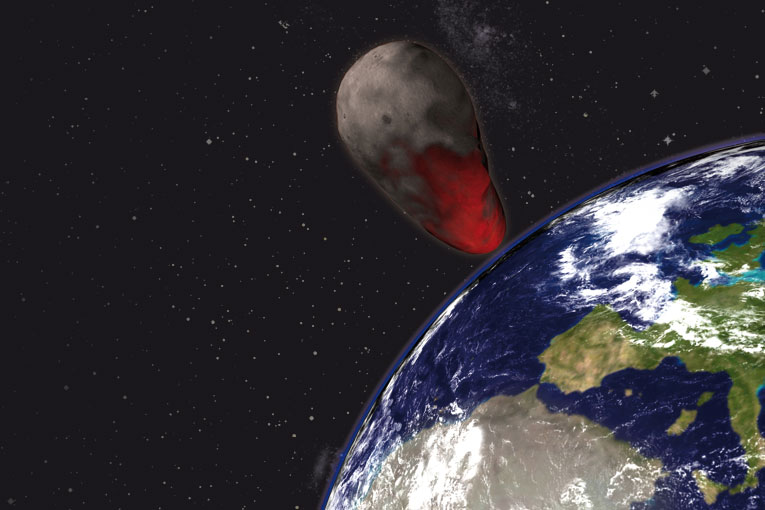 Concerning the alleged Mayan apocalypse prophecy, a friend of mine asked: «Well, after this new fiasco, what’s the next scheduled end of the world?» Lists abound on the Internet compiling different predictions made about the end of the world (even Wikipedia has one: apocalyptic events) and you will not be surprised that there is an average of almost one prediction a year. Anyway, there are prophecies with much more media pull, and we have to recognize that the Mayan one was a «hit», I believed supported in part by the film 2012 (I recognize I was completely unaware of the «prophecy» until I saw the trailer for the first time).

All of this made me think how something as simple as a change of cycle (akin to our passing from year 2000 to 2001, which was also much talked about) can cause such a commotion. I dread the press reaction when we get closer to 2029, moment of the critical approach of the asteroid Apophis –the name coming from the Egyptian God of Chaos–. This space object could collide with the Earth in 2036, depending on the disturbance on its orbit caused by the 2029 approach. We will have to throw the TV out the window.

At the beginning of the year 2012 we could enjoy an aperitif with the small asteroid 2012 DA14, with a diameter of 60 metres, which grazed Earth on February 15th and had huge media coverage. In fact, its passage was almost identical to Apophis’ in 2029. The main difference is size. If 2012 DA14 hit the Earth, it would create a crater of just a few hundred metres and damage the area within 20 km. But Apophis is whole other deal.

Apophis is an object around 325 metres wide, according to measurements made on January 9th by the Herschel Space Observatory during its last approach. In its itinerary, Apophis crosses the Earth’s orbit twice a year. Up to now, those occasions always found the Earth in a different part of its orbit, but on April 13th 2029 it will be really close, only 30,000 km away (the Moon, in comparison, is ten times further away). Being so close, there is a possibility that the Earth’s gravitational pull might modify Apophis’ orbit in such a way that, during its next approach, seven years later, it could hit the Earth. We will not be able to measure this until after 2029, after the asteroid passes by, although the probability of this happening is very low (even 0%, if the calculations made by the Goldstone Observatory, made according to measurements taken during this last approach, are correct). 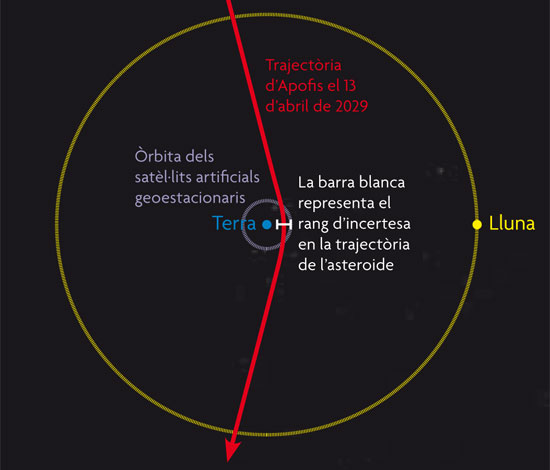 Recreation of the trajectory of Apophis during his passage in 2029 (in red). Its trajectory will go inside the artificial geostationary satellite belt (in grey), so it can destroy some of them during its passage. The white bar represent the uncertainty range of the asteroids trajectory. The position of the Moon, in comparison, is depicted in yellow.

So most surely, in 2036 the only impact Apophis will have will be in the media. But what would happen if Apophis hit the Earth? An object of that size would mean an explosion of around 700 megatons, equivalent to 50,000 Hiroshima bombs or four volcanoes like Krakatoa. In fact, very similar to another famous volcano eruption, Thera or Santorini, which happened around 1600 BC and is possibly the origin of the myth of Atlantis. If Apophis fell on land, it would completely devastate as big an area as the province of Castellón, creating a 5-kilometre crater. And it would send a cloud of dust and debris into the high atmosphere that would take around a decade to settle again, blocking sunlight and provoking a long winter that would surely affect crops. If it fell on the sea, the dust cloud would be smaller, but in exchange it would create an enormous tsunami with serious consequences for our coastal populations.

It would not be, however, the end of the world. Anyway, it would be better if it can be avoided. That is why different options are being considered. Options like the Don Quixote probe, whose job is to crash onto an asteroid in order to study if its path can be modified to keep it from colliding with the Earth. Apophis is precisely one of the possible objectives of the mission. In any case, with or without Don Quixote, sooner or later Apophis will end up hitting the Earth, as will some of the comets producing meteor showers; these happen when the Earth goes through a comet’s dust tail. And the Earth crosses comet trails precisely because their orbits cross the Earth orbit. As Carl Sagan said, «the beauty of a meteor shower should not deceive us: There is a continuum that connects these shimmering visitors to our night skies with the destruction of worlds».

«In 2036, the only impact Apophis will have will be in the media. But what would happen if Apophis hit the Earth? An object of that size would mean an explosion equivalent to 50,000 Hiroshima bombs»

Those impacts are relatively frequent, and that is proven by the fact that there are around 170 impact craters on Earth of more than 20 metres (there would be many more weren’t it for the erosive activity of our planet), a good deal of which was discovered from space. A lot of formations that that looked like a different thing from the ground, like some lakes, showed their true nature when observed from above (In Spain we have our own impact crater in Azuara, Zaragoza, very eroded by human activity). Objects of several tens of metres, like as the one that caused the Tunguska event, fall to the Earth approximately once every century. Objects like Apophis, once every ten thousand years; a 1-kilometre object, big enough to cause a global catastrophe, every million years; and 10-kilometre objects, capable of mass species extinction, every few tens of millions of years.

We know there have been several global extinction events in the history of the Earth, the last of which, the extinction of the dinosaurs 65 million years ago, is associated to a big meteor impact. In 2005, Muller and Rohde published in Nature a curious study about animal diversity based on time. They focused on counting genera (instead of species, much more difficult to count) in marine fossils –there are more than on land and provide better statistics–. Working with genera, they easily detected there had been more extinctions than the five we used to know. The data suggested a cycle of around 62 million years of biodiversity followed by extinction. The existence of a cycle to regulate extinction seems to indicate the same origin for all of them. The reason might be endogenous, with the biosphere self-regulating its extinctions, but if it is true that the last great extinction was caused by a meteor impact, it can be defended that the others were, as well. If that is so, we are running three million years late for the date.