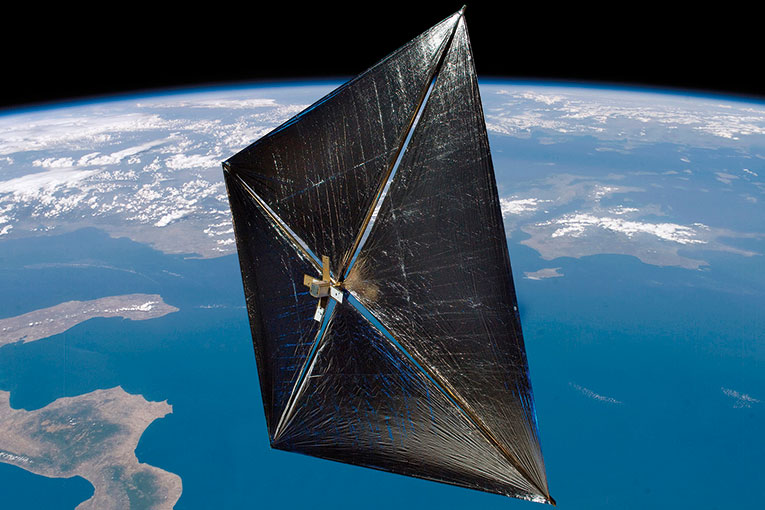 If anything makes space travel particular is its roughness: fuel bursting in a controlled explosion, which, more than once, end up being uncontrolled. But space exploration based on chemical rockets is well established, it is effective and likely to remain crucial for the future of astronautics. However, decades ago science fiction imagined a different way to explore outer space in a much more delicate, economical and romantic manner –solar    sails. The concept is simple, and in fact very old, since it is based on traditional sea sailing: a large surface that collects wind and pushes the ship enabling navigation without fuel. But, what kind of wind are we talking about, if there is no air in interplanetary space?
Well, we are talking about sunlight.

Light is capable of causing thrust on matter. Sunlight produces a force of 9 μN per square metre on Earth, which is equivalent to 1 kg over a 100 hectare surface. That is, if we could put 100 hectares on a scale, we could see that, by day, they weigh one more kg than by night. Still, it is a very small thrust and a solar sailing ship needs long masts, big sails and very little mass in order to be effective. A sailboat weighing a ton would require a square 190 metres wide sail in order to accelerate from 0 to 100 km / h within … one day.

Intuitively we can understand how a probe launched from Earth can go to outer planets using sunlight, but how does it make the trip back? Unlike a boat, a solar sail does not need to beat to windward; the sun provides energy for both ascending and descending, because, if sunlight works always outward, solar gravity does it inward. To approach the Sun, we need to simply place the sail in such a way that the thrust produced by the light stops the spacecraft. And once the ship has lost power, the Sun’s gravity will do the rest.

This technology is starting to step out from books and into the real world. Some probes, such as Mariner 10, already used their solar panels as sails in order to control the inclination of the ship. In the 1990’s Soviet probes Znamya (actually reflectors to project sunlight on Earth, as the Ikarus in Die Another Day) successfully tested technology to unfurl sails in outer space, as later NASA did with its NanoSail. In 2005, the Planetary Society sponsored Cosmos 1, the first attempt at solar sail navigation. But the launching rocket failed and did not reach the planned orbit where to unfurl its sail. Licking their wounds, the Planetary Society is preparing LightSail (and invites those who are interested in helping to donate money), whose launching is scheduled for 2016. NASA, for its part, is preparing Sunjammer, with the biggest solar sail used so far, measuring 38 metres wide, for 2015.

But they will not be the first. Japan hit the jackpot in 2010 with Ikaros, the first solar sail ship which, with a 20 metre sail and after a close pass by Venus, showed that it is indeed possible to navigate through the solar system using sunlight. Ikaros remained operative for two years, flying between planets until its equipment gradually degraded and lost the ability to manoeuvre.

Johannes Kepler deduced that the Sun could produce pressure when he noticed that comet tails always pointed in opposite direction to our star, and he wrote: «One day there will be spaceships with sails that adapt to sky winds, sailing through the firmament filled with explorers that do not fear the immensity of space.» Four centuries later, it seems his prediction is starting its fulfilment.