An idea is not enough in itself 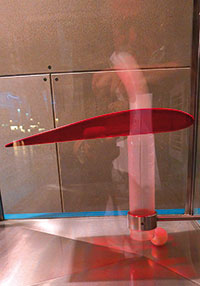 Photo: Jorge Wagensberg[/caption]There are three necessary components for creativity of the human mind: to have a good idea, to recognise the idea is good and to persuade others it is so. Obviously the first is necessary for the second to occur, while the second must necessarily precede the third. Each step is indispensable for the next to come about, but one alone is not sufficient for an idea to finally transcend. However, all three do not always coincide in the same person. Below I give three examples. In the first, the genius meets only two of the requirements, in the second only one is met, while in the third things get complicated.

In the early twentieth century, the Russian scientist Konstantin Merezhkovsky had the most beautiful and brilliant idea in biology since Darwinian natural selection: eukaryotic cells (with nucleus, mitochondria, chloroplasts…) are the result of the symbiosis between bacteria. Let us say, simplifying somewhat, a bacterium that was able to eat and digest very well but moved with great difficulty swallowed a bacterium that ate and digested with difficulty but swam very well. Instead of one digesting the other, they made a pact: «I’ll eat and digest, and you move». This is the theory of symbiogenesis, which explains how eukaryotic cells arose during evolution, that is, cells which can form multicellular individuals. Not only did Merezhkovsky have a brilliant idea, he also realised that the idea was important, even essential, to understanding evolution. But he failed to convince the scientific community of his time and, therefore it all boiled down to little more than conjecture. That is precisely what was achieved by Lynn Margulis, who is quoted whenever mention is made of this beautiful theory. Margulis proved the old conjecture.

Another example is the celebrated theory of fractals. No one would argue that the recently deceased Benoît Mandelbrot was the father of the theory. But, one has to admit, as does Mandelbrot himself, that he did not invent the idea. But he was the one who spread it and who noticed its enormous interdisciplinary importance (biology, chemistry, mathematics, architecture, art, geology, sociology, geography…). He was also responsible for coining the term, giving it the name it will be known by forever. Mandelbrot took Richardson’s idea, developed it and gave it scope and validity, then sold it way beyond the bounds of the scientific community.

«There are three necessary components for creativity of the human mind: to have a good idea, to recognise the idea is good and to persuade others it is so»

Another notable but utterly unknown case has to do with aircraft flight. Why do airplanes fly? To answer this question Bernoulli’s theorem in hydrodynamics is most often cited. The idea is summarized as follows: the profile of an airplane wing is designed so that a particle of air takes a longer path over the top of the wing than the bottom. This causes the speed of air to be higher at the top than at the bottom, which, under the theorem implies that the pressure under the wing is greater than above it. The difference between both pressures multiplied by the wing surface is no more than the force that holds the plane up in the air (which neutralises the weight). This is explained in all textbooks, in all science museums and all aviation engineering schools.

But truth be known, this simply is not true. Bernoulli only explains a small part of the force that holds up an aircraft (otherwise a plane could not fly upside down and a Boeing 747 would not rise an inch from the ground). Here, then, is an idea that gained much more recognition than it deserves. However, in this case the author did not earn his reputation unfairly. He was very famous, but not for proposing a wing shaped according to Bernoulli. Who was this character? The person considered to have come up with the idea certainly was not the one who had the idea, but was the first to publish it and the first to suggest it to an aircraft builder (Fokker) in the early twentieth century. In fact no one remembers who was actually behind the fully universal wing design of today.

Who was this transcendent person, who had a transcendental idea but did not transcend due to it, but rather thanks to many other ideas he had during his lifetime? I think the reader will be surprised by the answer: this person was Albert Einstein.