Scientists of letters? Of Course!

Scientists are used to write, whether for the purposes of taking notes of our observations, experiments or intuitions (notes which are later on consulted and need to be decipherable by the author himself), or to write documents for publication (better still: documents that won’t be published unless they are understandable, regardless of their scientific interest), or to prepare projects that some supposedly knowledgeable referees will assess. And yet, if we are teachers, we need to properly prepare the lessons, notes and texts we recommend to our students (and possibly the handbooks we would like to publish and that will help us, to a greater or a lesser extent, present the subject we are allegedly experts on).

«It is necessary that scientists are also men (or women) of letters. Some scientists, however, just don’t know how to write, regardless of whether they are good or not at what they do»

It is therefore necessary that scientists are also men (or women) of letters. Some scientists, however, just don’t know how to write, regardless of whether they are good or not at what they do, of their skill to explain their hypotheses and of whether their lessons become master lectures or not. We all know excellent professionals in different fields of science or humanities, who despite their skill to give lectures are unfortunately unable to write two understandable lines in a row, let alone a usable text, be that a scientific text, an essay, or an educational text. There are obviously good scientists who not only write science, but they are good also at targeting the general public. These are called science communicators. Carl Sagan, Edward O. Wilson, Richard Dawkins, Stephen Jay Gould, Lewis Thomas, Jared Diamond, to name just a few of the «greatest» of the English-speaking world, write and have written for a relatively educated general audience that receives science in small simplified and attractive doses, provided by these great names of popular science writing. In our country there are plenty of science communicators with a scientific background: from Claudi Mans and Xavier Duran (chemists) to David Bueno, Carles Lalueza, Andrés Moya, Martí Domínguez and Pere Puigdomènech (biologists), from Jordi Agusti and Miquel de Renzi (geologists ) to David Jou, Jorge Wagensberg and Josep Enric Llebot (physicists). (I stop here, not because I lack examples, but because I would use up my word count). 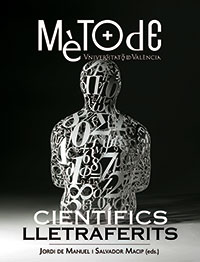 Some scientists are men and women of letters in a different way: their ability for creation goes beyond their own environment, which involves the particular area of ​​science they study in universities and research centres. Thus, we have scientists who are excellent poets (writing verses that rhyme to some extent is something many of us can do, but actual creators of true poetry are but a few). In our country, just as an example, we can find David Jou (physicist), Jaume Terradas (environmentalist) and Carles Miralles (philologist). Some also write plays (and their works are staged!) like Ramon Gomis (endocrinologist); others are enlightened visit guides of the countries they travel to (like Santiago Riera, engineer and historian, or Carles Pedrós, microbiologist); others write for kids and the youth (again Jaume Terradas). And of course, there are those who report the science of the past (Xavier Bellés, biologist and lover of medieval bestiaries) or those who successfully made an attempt at science fiction (Miquel Barceló, engineer; Pere Puigdomènech, Pere-Joan Cardona, physicians, Carles Cuadras, mathematician).

There are many who dare to start writing a novel, which are linked (or not) to their beloved field of science (Marià Alemany, Martí Domínguez, Sergio Rossi, biologists). I saved for last the string of scientists who translate into their own languages scientific or popularising works (not necessarily) of their field. The translator’s task is of paramount importance and is not without creative ability to interpret the author, make clarifications to the reader or anything else. The list of good scientific translators in our country would be a very long one, but I will save the reader the trouble of reading it.

«If the scientific and university establishment does not value our non-scientific, or popularising, literary or poetic production, why do we keep on writing?Because we are men and women of letters»

Today scientific journals (and their authors!) are more direct and they condense in just a few words the most relevant aspects of the research they want to publish. And obviously, if you have a thirst for literary creation, you cannot quench it through strictly scientific publication methods. One needs to follow the ways that other writers with no professional affiliation (or at least non-scientific affiliation: lawyers, architects, economists, politicians, etc.) have followed. 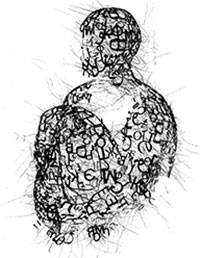 Based on a work by Jaume Plensa

Moreover, it is not only the desire to create literature what impels scientists to write away from their particular field of expertise. Often (and especially nowadays), it is the desire to denounce the nonsense they come across on a daily basis in their working environment, or society in general and they are just as eager to expose them as non-scientific authors (to put it that way) or investigative journalists. The miseries of university life, from teaching and administration tasks to the battlefield that the research world is, both in the laboratory and in scientific journals and companies (pharmaceutical, armaments, or whatever) that make (or buy) some of this research; scientific and university policy, or the connections of the latter with tout court politics. And even our own experiences in our branch of the tree of knowledge that enable us to contemplate from a privileged perspective the problems that we, as a society little or not at all informed in these particular branches, suffer without realizing it, or perhaps we do, but only superficially. I myself –there is no need to look any further– have published half a dozen books and a hundred articles on environmental issues where popularisation and denunciation are equally present.

Oh! These literary extensions, regardless of their self-worth and however readers welcome them, tend to only have the joy of self-complacency of their authors. Popular science, despite its not being easy to practice around any field of science, is not as valued in our country as it should be, neither by those responsible for science policies (try to defend it in front of a National Examination Board!), nor by our own non-literary colleagues (it is called the Sagan effect because this excellent astronomer and astrophysicist, prolific author of science-science, dared to popularise science, and very well indeed, and also to write good science fiction). Opinion columns (expert or not) are even more disregarded, whether they are published in general journals or somewhat or very specialized cultural magazines. Not to mention literary works, which may be at the height of non-scientific authors and even get awards, but will always be considered to be of lesser importance by their peers, who are critical of the work of others even though they may not have any of their own, except for scientific publications.

So if the «market» is so low in our country; if colleagues do not always understand our need to write things other than articles and scientific and technical books that relate to our area of ​​expertise; if the scientific and university establishment does not value our non-scientific, or popularising, literary or poetic production, why do we keep on writing? Because we are men and women of letters. Because we have as much a right as anybody else, that is why. Because scanning the world from the vantage of science enables us to perceive things that others may overlook. Because results are usually good, really good.

Full Professor of Ecology of the University of Barcelona and President of the Institute for Catalan Studies (Barcelona, Spain).