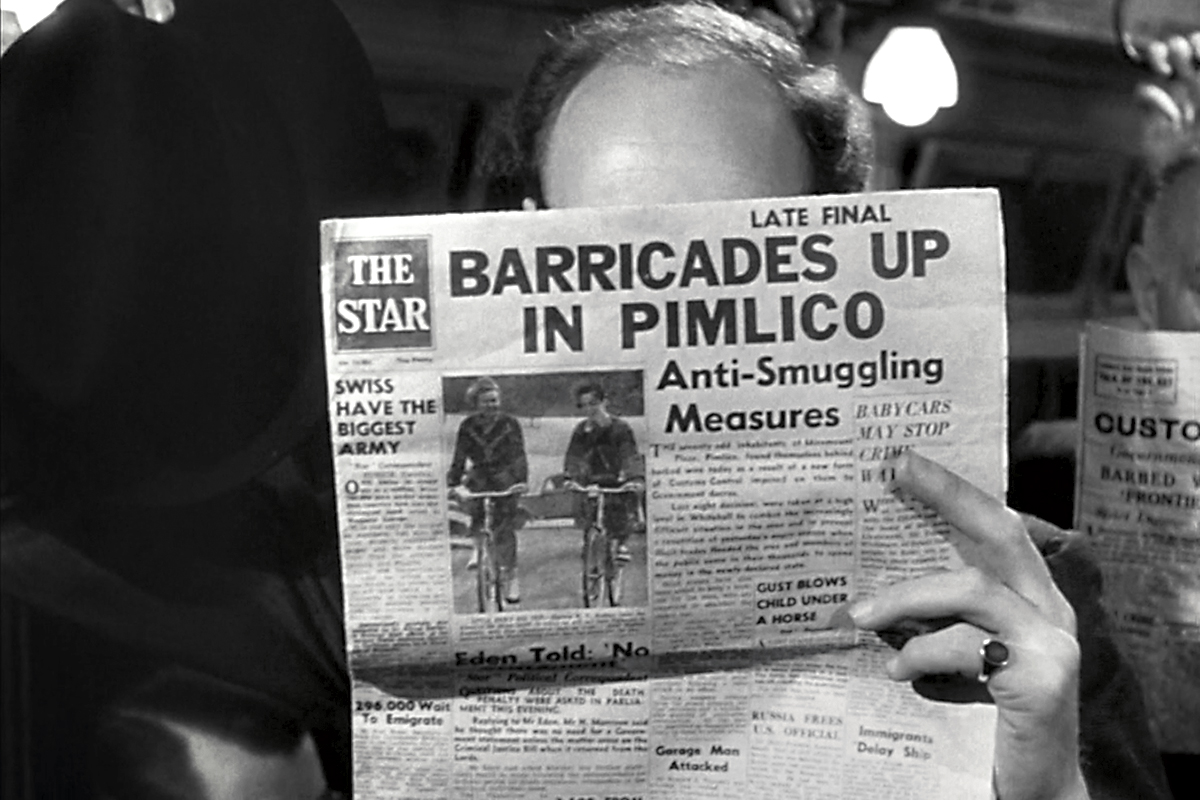 There is a genre known as feel-good movies: kind comedies that reflect good feelings and the best of human character; some examples are Forrest Gump, The princess bride, and Love actually. If we look at classic films, the first name that comes to mind is Frank Capra, an Italian-born director who wrote cheesy family comedies that have aged very well, against all odds. And if you do not agree, after eating your next Christmas meal, turn on the television and surely they will be broadcasting one of his comedies on one channel or another.

In the period between 1947 and 1956, the British production company Ealing specialised in satirical comedies, which could be considered feel-good films. In the midst of the post-war period, and in a London devastated by German air raids and V2 missiles, they chose to give an optimistic message, as in Passport to Pimlico (1949), the film that we are dealing with here.

«The scientist who has saved the most lives is not Alexander Fleming, but Norman Borlaug, the father of the second green revolution»

A bomb explodes in a London district, exposing a secret chamber containing documents recording the donation of a house and its adjacent area, in what is now the Pimlico district, to Charles VII, the last Duke of Burgundy. Because there are living descendants of the duke, these documents certify that Pimlico is no longer part of Great Britain, but an independent micro-state derived from a medieval duchy. The story is inspired by a real event. During World War II, a section of the Ottawa hospital maternity ward was declared independent from Canada so that Princess Juliana of the Netherlands, exiled there by the German occupation, could give birth without her daughter losing her rights of succession to the crown.

In the film, the English authorities were not as kind as the Canadian authorities. Once Pimlico became independent, England cut off their supplies, including electricity and water. This was the time of rationing, so the people of Pimlico decided to lift the food restrictions and create a free market, which meant they could import foreign currency. No different from what many micro-states are doing today. The idea turns out to be a disaster because there is no control, low-quality or badly preserved food is marketed and, when the buyers realise this, the free market ends up closing down. A case similar to that of the shredded meat crisis of August 2019, in which greed and lack of control led to a crisis, and destroyed the company responsible for it.

It is now fashionable to say that food is not healthy or that it is poisoning us. The latest Eurobarometer says that the main food concern of Europeans is not finding traces of pesticides in their food. The reality is that consumers’ exposure to them is irrelevant. Thanks to food safety, diseases such as typhus and cholera have virtually disappeared, while others such as salmonellosis and listeriosis are under control, apart from occasional cases generally due to negligence. When we think about our current quality of life, we often look at medical advances such as vaccines or antibiotics, but forget that we usually eat three times a day. If we did not have a constant supply of food, and if this food was not safe, we would have not been able to achieve today’s standards of life expectancy and well-being. The refrigerator has saved more lives than antibiotics, and the scientist who has saved the most lives is not Alexander Fleming, but Norman Borlaug, the father of the second green revolution. An agronomist, not a doctor. We may need a doctor at certain times in our lives, but we need a farmer three times a day.