Experts analyse the connection between confinement and air quality 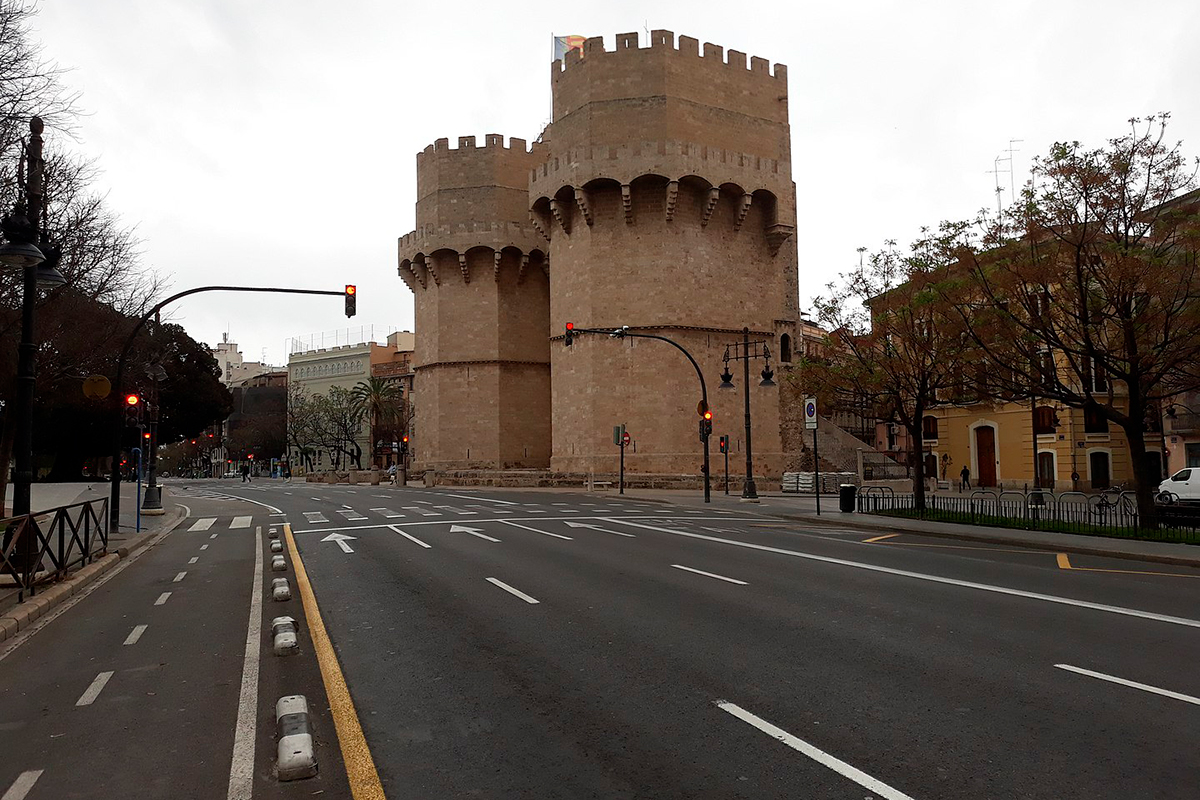 Motorised vehicles are, along with industrial emissions, largely responsible for urban air pollution and its effects on health. In the picture, the city of Valencia, empty due to the COVID-19 confinement. / Pacopac, Wikimedia Commons

The confinement has brought unusual images to our streets. The absence of cars, the presence of animals that usually live far from large cities, or the transparency of often murky waters seem to indicate that something is changing. Is the planet benefiting from a halt in human movement? Is pollution decreasing? Faced with these and other questions, experts are starting to study the situation and have already found some answers, especially with regard to the reduction of harmful gases such as nitrogen dioxide. Even so, we must bear in mind that environmental pollution is caused by many agents and we that measures must be taken to limit or even eliminate them if we want to live in a city where breathing does not pose a risk to health.

The quarantine is generating better quality air that is more beneficial to people’s health, but how long will this environmental improvement continue once we return to normality?

In response to this question, the experts were unanimous: the positive effects will be short-lived unless mechanisms to reduce pollution, such as limiting traffic in the city, are activated. They also agree that it is not necessary to wait for the next crisis to take action, and express the need to set up techniques to improve the environment and thus protect citizens from future pandemics and effectively deal with the climate emergency.

What is nitrogen dioxide?

The Centre for Physics Technologies of the Polytechnic University of Valencia has published a study showing how nitrogen dioxide concentration levels have decreased by an average of 64% since the confinement started. One of its authors, Elena Sánchez, explained to Mètode that the study was based on a selection of satellite images from the new Sentinel-5P mission of the European Space Agency’s (ESA) Copernicus programme. These images correspond to Valencia, Castelló, and Alacant, as well as other Spanish cities with a high level of air pollution as a result of their industrial activity, like Barcelona, Madrid, Bilbao, or Malaga. According to the study, the province capitals of the Region of Valencia have experienced a significant decrease in pollution: Castelló, 76%; Alacant, 68%, and Valencia, 64%.

«The current situation has led to a decrease in polluting gases at the local level, but the levels of pollutants in the atmosphere continue to break records»

The nitrogen oxides present in urban air come from high-temperature combustion in motor vehicles. Thus, oxygen and nitrogen combine and produce nitric oxide (NO), which, when partially oxidised, generates nitrogen dioxide (NO2). High concentrations of nitrogen dioxide can affect the respiratory system and aggravate lung diseases, and are also related to the formation of acid rain. 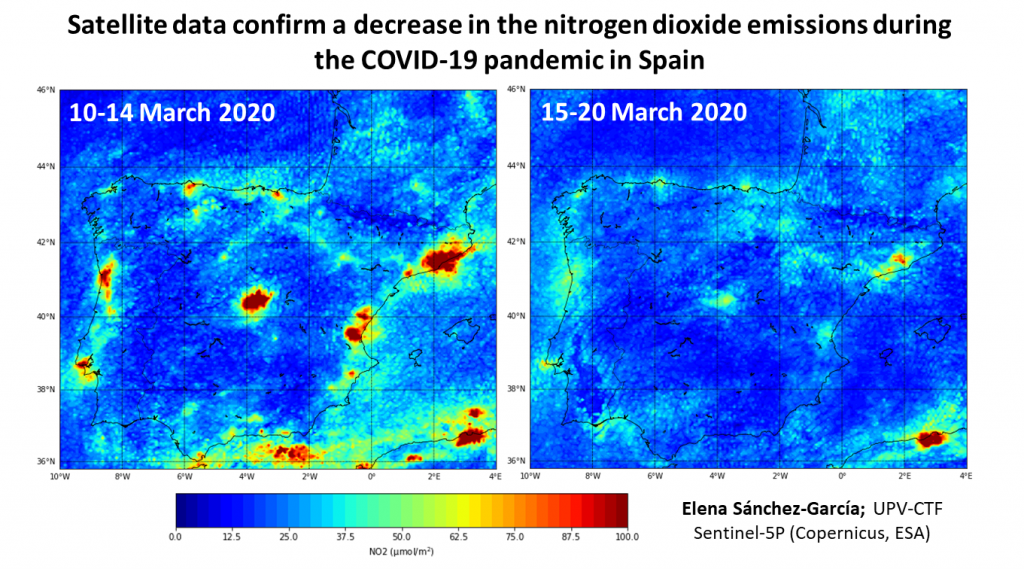 As Elena Sánchez explains, the first tests have already been carried out on carbon monoxide (CO) and sulphur dioxide (SO2), two other polluting gases measured by the Sentinel-5P satellite mission. However, results were not as clear as those for NO2. According to the researcher, this is due to the fact that measuring nitrogen dioxide is simpler than measuring carbon monoxide and sulphur dioxide, which require longer monitoring periods to provide clear results.

According to Sánchez, the current situation has led to a decrease in polluting gases at the local level, but the levels of pollutants in the atmosphere continue to «break records» day after day, with high concentrations of long-lasting gases such as carbon dioxide and other greenhouse gases.

In addition to other gases such as nitrogen dioxide, there is another very important pollutant in urban areas, the so-called particulate matter (PM). According to Víctor Estellés, professor of thermodynamics at the University of Valencia, particulate matter can have different origins: it can come from naturally formed earth dust or from the combustion of motor vehicles. According to Estellés, the latter type is the most dangerous to our health, both in terms of its composition and its size. Particulate matter from vehicles penetrates the respiratory tract and reaches the alveoli, where it is difficult to remove. «Sometimes the smallest particles can even get through the walls of the alveoli and enter our bloodstream, where they accumulate in our bodies», the professor explains.

«Particulate matter can have different origins: it can come from naturally formed earth dust or from the combustion of motor vehicles»

The professor explains that, according to a report published last year that analysed daily mortality from respiratory and cardiovascular causes related to the concentration of PM and other atmospheric air pollution parameters, direct correlations were found between deaths and the concentration of PM2.5 and PM10. The study, which analyzed 652 cities in 24 countries, including Valencia, concluded that there is no minimum parameter below which there are no negative effects on exposures to particulate matter. In other words, any reduction in PM is beneficial, regardless of the initial air quality. The expert indicates that these improvements would translate into fewer deaths from air pollution which, according to a report by the European Society of Cardiology, causes around 790,000 deaths in Europe each year.

Motor vehicles are, along with industrial emissions, largely responsible for urban air pollution and its effects on health. This is where movements such as the València per l’aire organisation originated, demanding a reduction in motorised traffic and an improvement in air quality in the city.

David Hammerstein, former member of the European Parliament for the Green Party and member of València per l’Aire, says that the city needs a dramatic reduction in motorised traffic. As he explains, the decrease in the number of vehicles on the streets these days is not enough because, apart from the fact that there are still cars on the road, there has been an increase in delivery trucks that pollute more than a regular car. Nevertheless, he also claims for the Valencian industrial sector to take responsibility. «Valencia suffers industrial pollution from port cranes, large ships, cruise ships that pollute as much as hundreds of thousands of cars, factories that glaze ceramics, cement factories…», he says.

According to the former member of parliament, policies are needed to limit the use of vehicles in the urban environment and to encourage alternative means of transport. One of the measures he proposes is, for example, to reduce as much as possible the number of parking spaces for students and teachers on the Tarongers campus of the University of Valencia and to talk to the public transport companies to offer free or reduced-price services for the community, as well as to increase the transport network within the metropolitan area.

Stating that «public health policies do not exist in Spain», Hammerstein calls for greater attention and investment in disease prevention measures to avoid overloading the health system, especially looking ahead to future pandemics. «We must reduce the agents responsible for air pollution, such as vehicles, industrial production, or constructions like the expansion of the port of Valencia or the Benimaclet urban project as much as possible. Poor air quality makes us more vulnerable to disease and now is the time to invest in preventive public health», he says.

The impact of confinement on health

On a different note, Ferran Ballester, Professor of Nursing at the University of Valencia, states that although the improvement in air quality during these days brings health benefits, we must also study the effects of total confinement on people. Studies on this subject are starting to be carried out in countries such as China.

Firstly, Ballester says that in this exceptional situation, we are losing the benefits of physical activity. The fact that people can no longer go out to exercise or travel on foot and by bicycle can have a negative impact on their health in the long term. As a precautionary measure, the expert suggests the possibility of providing open spaces with different time slots so that citizens can engage in some physical activity, especially if confinement is prolonged over time.

«Although the improvement in air quality during these days brings health benefits, we must also study the effects of total confinement on people»

«Another problem arising from confinement is the increased exposure of passive smokers to tobacco», says the professor. As he explains, confinement at home can lead to more smoking in enclosed spaces and, therefore, an increase in the exposure of family members or roommates to the harmful components of tobacco, which damage respiratory health and cause possible long-term pathologies that increase the vulnerability of patients to illness or infection.

However, the expert says that we can take advantage of the impact that the coronavirus crisis is having on our society to develop habits that improve our health, such as establishing measures to improve air quality (and thus prevent premature deaths from contamination by particulate matter) or introducing new ways of relating to each other that are more hygienic and safer, such as safer social distances.

«Public health has advanced as a result of disasters», says Ferran Ballester, inviting us to reflect on the health system and its current situation after years of cutbacks. As he explains, we are currently in an impactful moment and we still do not have the perspective to analyse the consequences of what is happening. Even so, the expert considers a dilemma that will affect health in the future: the decision to prioritise either ecology or economy. 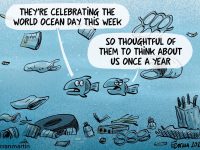