«With CRISPR, we want to modify genetic defects in cells»

Last January, an article named «The heroes of CRISPR» was published in the prestigious science journal ‘Cell’. This text mentioned the name of a professor at the University of Alicante, Francisco Juan Martínez Mojica. The importance of this microbiologist and his discovery, however, is not that recent. In fact, we need to go back to the Santa Pola Salt lakes at the beginnings of the 90s, in order to understand the origins of CRISPR (clustered regularly interspaced short palindromic repeats), a genetic technique that is now considered the most important of the century.

[English subtitles are available for the video.] 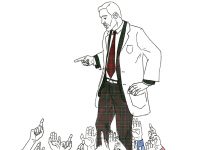 Science as a tool or as a protagonist?