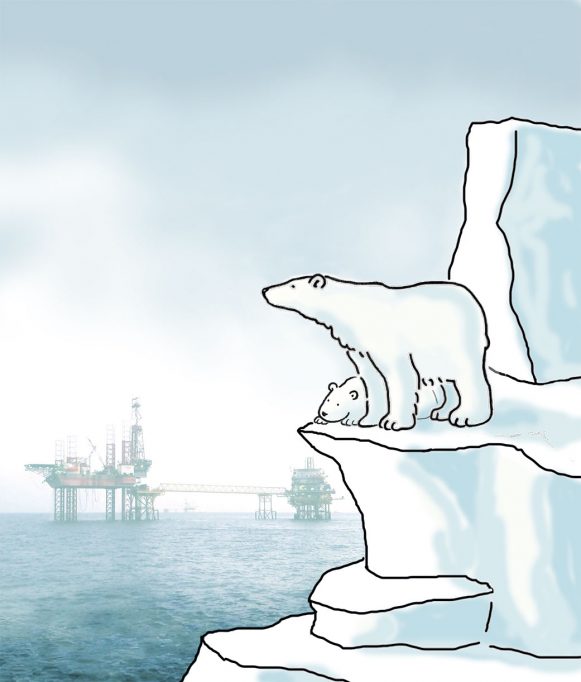 The list of Greenland glaciers that flow into Baffin Bay seems to be endless: Humboldt, Bowdoin, Pitugfik, Nansen, Rinks, Jokobshavn, Sermeq, and many more. All of them are located above the Arctic Circle, at hyperborean latitudes between 66 and 80º N. They are sort of like the strands in which the Greenland Inlandsis gradually melts, an immense mass of continental ice of about 3 million km3, accumulated since the last glaciation, some 110,000 years ago. Just the thought of the sheer volume of ice makes you dizzy.

Between April and September, Baffin Bay, an inlet connecting the Atlantic and the Arctic through the Nares Strait, is a Capernaum of ice blocks broken off from the glaciers, which we call icebergs (i.e., “mountains of ice”). Carried by the currents, these icebergs drift south, first into the Labrador Sea and then into the Atlantic. Viewing them from the coasts of Labrador and Newfoundland is now a tourist attraction. Indeed, watching these great masses of frozen fresh water sailing majestically into the ocean is spectacular.

Icebergs break off from all Arctic and Antarctic glaciers, but by far the most famous are the ones that spit out of Baffin Bay because they are the most numerous and, most importantly, because they end up in the North Atlantic, in one of the most important shipping areas in the world. Icebergs take a long time to melt, so they can be found at latitudes 40° N and even further south, in the middle of the sea route between Europe and North America. Because of the density of the ice, nine-tenths of the icebergs are submerged, which explains why they take so long to melt completely and also why they can be so dangerous. The best known accident was undoubtedly the tragic sinking of the Titanic in 1912 at latitude 41°43′ N (the same as Barcelona!).

«Should we be investing in protecting  offshore platforms from icebergs, or rather directing our efforts towards removing them all everywhere»

It was precisely because of this shipwreck that the First International Conference for the Safety of Life at Sea (London, 1914) created an international iceberg patrol service. It was entrusted to the United States, which formed what is now called the Coast Guards International Ice Patrol. Using naval, aerial, and satellite resources, this organisation monitors Atlantic icebergs one by one and even diverts their course in certain cases. It is enough for ships to know the exact position of icebergs so they can avoid them, but oil rigs are stationary, so they depend on icebergs being steered away from them. However, should a public agency be at the service of these extraction platforms?

The growing demand for oil and gas, coupled with the progressive depletion of mainland fields, has led to the expansion of offshore platforms. There are more than 1,300 worldwide. In the Canadian iceberg area, there are just over half a dozen, but they are enough to prompt reflection: will they externalise the cost of surveillance, just as other platforms externalise the costs of environmental degradation? In any case, the Baffin icebergs are becoming more numerous (more than 200 km3 of erratic ice per year) because of climate change, caused precisely by the large-scale burning of fossil fuels, which is accelerating the destruction of Greenland’s vast Inlandsis. The rate of melting is now seven to eight times faster than the generation of new winter ice; if it melted entirely, the sea level would rise by 20m.

We should ask ourselves whether we should be investing in protecting the offshore platforms of Labrador and Newfoundland from icebergs, or rather directing our efforts towards removing them all everywhere, while we continue to develop the capture of energy from renewable sources. It is true: the victims of so many new icebergs and melting ice caps will not be ships, but our way to exist in the world. Maybe we should think about it…