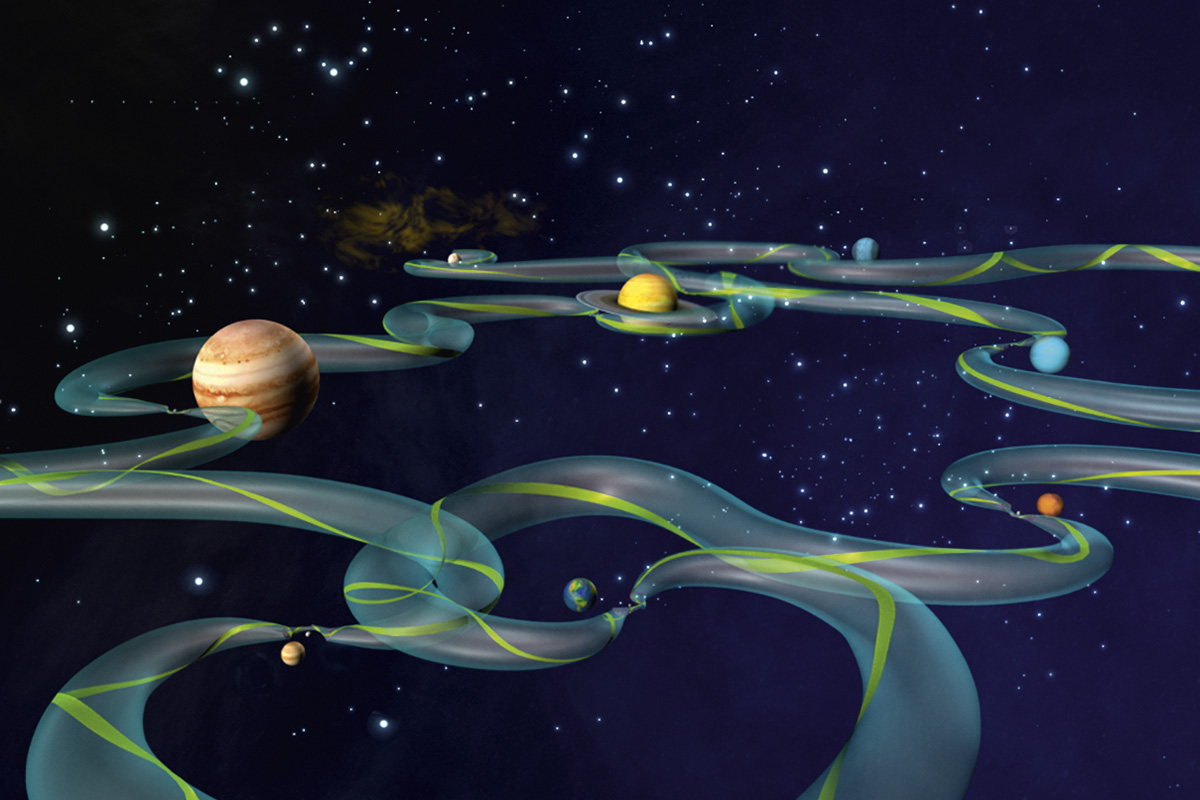 Artistic representation of the Interplanetary Transport Network (ITN). The green ribbon represents one way among many that are mathematically possible along the surface of the darker green bounding tube. / Wikipedia

The Lagrange points are regions of gravitational balance in the surroundings of two stars in which it is possible to leave a ship and keep it there with very little effort. The most intuitive of these points, the L1, is between the two stars and is the place where the force of gravity of both bodies is neutralised, but there are four more points where, for forces to be balanced, the centrifugal force must also be considered. Except for L4 and L5, these points are unstable, and, most interestingly, their instability is chaotic in nature. Without corrections, a ship placed in one of them will eventually move away arbitrarily without the need to consume propellant. It is hard to know where it will end, for by the very nature of chaotic systems, a small disturbance can produce radically surprising end results. It is difficult to accurately calculate the final trajectory, but we can do it today thanks to massive computer calculations.

More interesting is the fact that some of these trajectory tubes sometimes intersect with those of other systems, such as the ones belonging to Mars, Jupiter, or Saturn. With a small change in speed, it is possible to jump into one of those tubes and thus travel without virtually any energy expenditure, for example to Jupiter (or even without any expenditure at all, since there are zero consumption trajectories used naturally by some asteroids or comets, such as comet 39P/Oterma). Of course, the exact configuration of these paths changes from time to time depending on the position of the planets.

This set of trajectories forms what has been called the Interplanetary Transport Network (ITN), a network as old as the Solar System which would have never been discovered without the power of computers. A few space missions such as the Genesis probe have already used this highway. The probe managed to go to the L1 point between the Earth and the Sun with very little energy expenditure; only 5% of its mass was propellant, compared to the SOHO mission, which went to the same place using a more direct (and faster) route, but whose propellant represented 50% of its total mass. Or the Chinese Chang’e 2 mission, which, after staying in lunar orbit, went to the L2 point in the Earth-Moon system, and from there flew to asteroid (4179) Toutatis using another of the ITN routes.

This makes it attractive to place a permanent space station at point L1 in the Earth-Moon system because, in addition to having easy access to the surface of the Moon or the Earth, it would be an excellent starting point for missions to the rest of the Solar System, an access portal to the Interplanetary Transport Network. Even if astronauts travel on energy-intensive fast routes, goods and merchandise could be shipped using slow, low-consumption routes. We have mentioned that some trajectories require no energy consumption at all, like those used in a natural way by some celestial bodies, but only those bodies have the patience such routes require: a zero consumption flight to Mars would take thousands of years.