Settlements on the Moon, cities on Mars 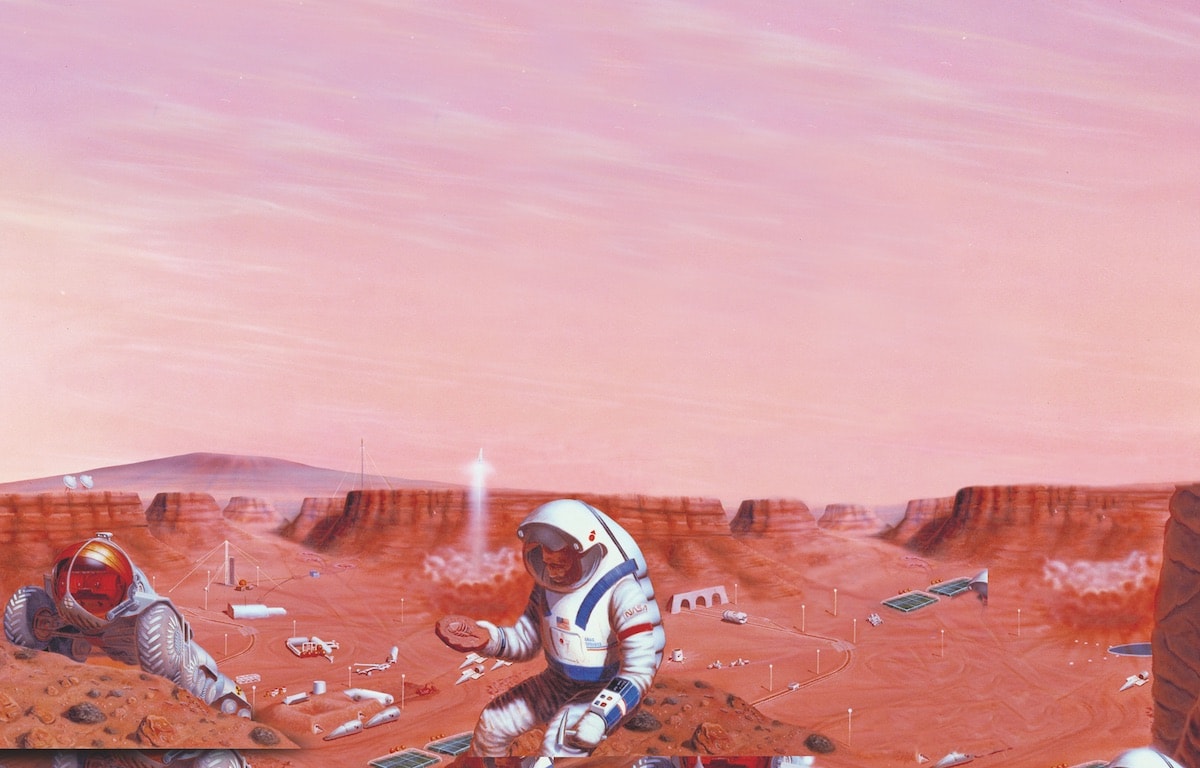 One of science fiction’s unfulfilled dreams was setting up settlements in other worlds. Even though there was a lot of speculation regarding space settlements when the space race was starting, there has been no serious attempt to do so, unless we take station MIR or the ISS (International Space Station) —which are only 300 km above us— as such. The truth is there are many problems to be faced in a space settlement (leaving aside the obvious monetary problem). For starters, it has to be properly sealed and protected from the outside conditions, so as to prevent water and air leakage and avoid radiation or micrometeors. But, above all things, it has to be self-sustaining. Space stations have their food and air supplied from Earth, whereas settlements in other worlds cannot have these supplies provided. It must recycle its own waste and generate food, oxygen and energy. Is this even possible? 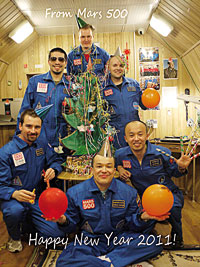 «Astronauts» from the Mars500 experiment on New Year’s Day. There has been a lot of controversy around the fact that all members of the crew are male. Although organisers claim that this is just a coincidence, others suspect that they wanted to avoid sexual tension between members of the crew. / Mars 500 – ESA

In theory, it is possible to create and live in this kind of ecosystem, as Clair Folsome’s «ecospheres» evidenced. Folsome, an American microbiologist, took a flask and introduced water, gravel, bacteria, algae, sea fans and shrimps and discovered that the system managed to remain balanced on its own for an indefinite period as long as it received sunlight.

The Soviets were the first to attempt an experiment involving humans in the 1970’s —Bios-3: a 300m2 laboratory that lodged three volunteers for periods of up to six months. Focused on recycling water and generating oxygen through algae (with great success), the system was partially autonomous: it did not recycle waste but stored it, energy was provided from the outside world and had a well-stocked food store every time the experiment was run (complemented with vegetables grown in Bios-3 itself).

The American «response» was the ambitious and failed experiment called Biosphere 2 —a one hectare perfectly airtight facility which contains gardens, wetlands, rainforests, savannahs, and even a lake with a coral reef, where eight people lived for two years in complete isolation. The experiment can be summed up in two concepts: hunger and bad vibrations. On the one hand, the crops produced within the facility were not enough for everyone, and the participants were continually hungry (in addition, we learnt later on that the organisation had cheated and had provided the participants with more food). On the other hand, members of the experiment split into two different groups that could not get along with each other from the very beginning. There were some more problems, like the unexpected decline of oxygen levels, which made the injection of oxygen necessary on two occasions. In the end, internal saboteurs opened every door in the facility, which ruined the experiment. All in all, there were some achievements: the structure was a wonder of engineering that expanded or contracted according to changes in temperature, and airtight systems worked according to expectations.

However, the Biosphere 2 experiment showed that getting along is one of the keys to success if we want to establish settlements in other worlds (as research stations in Antarctica have also showed). This is why a good psychological profile is essential. However, this meticulous selection process is no guarantee of success either: in 2007, Lisa Novak kidnapped and tried to murder her NASA co-worker, Colleen Shipman, because she perceived her as her romantic rival. Nowadays, isolation experiments focus more on relationships than on self-sustainability. 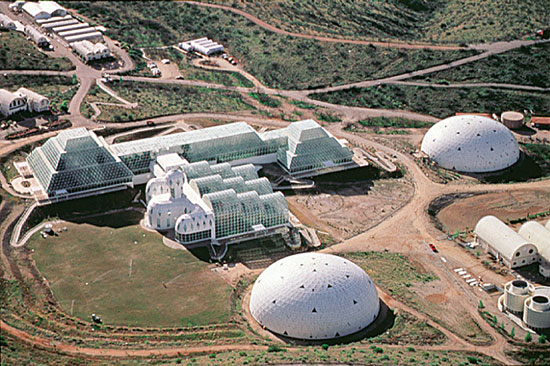 Biosphere 2 —where four men and four women lived in isolation between September, 1991 and September, 1993— is currently managed by the University of Arizona. / Cortesia de la Universidad de Arizona

This is what they have done with the Mars500 experiment, carried out by the Russian Academy of Science in Moscow in collaboration with ESA. This experiment recreates all the stages a possible trip to Mars would have to go through and aims to prevent coexistence problems that may arise. Six volunteers chosen among 6000 candidates live in isolation, recreating life conditions in a spacecraft. They communicate by radio, and the further they go, the longer it takes for them to receive an answer. The mission took off in June, 2010 and landed on Mars last February. It is already coming back to Earth and has had no coexistence problems (or at least not relevant ones).

Even though nobody questions its usefulness, Mars500 has not been without critics: a real mission would have to face the problems of weightlessness (which may cause bone and muscle problems) as well as the danger radiation poses. Mars500 is not self-sustainable, as any spacecraft should be. And, above all, volunteers know that, should anything go wrong, they actually can leave the place anytime. This is a very important psychological factor.

All in all, the main problem a future space settlement may have to face is an unexpected one: bureaucracy! Astronauts from the ISS have been complaining for years about the obstacles they have to face due to this kind of problems that make their everyday life on board more difficult. There are strict regulations that forbid astronauts to share anything with others, even food. Toilets are another source of controversy: every space agency provides their own toilets and Russian astronauts cannot use NASA toilets or vice-versa.