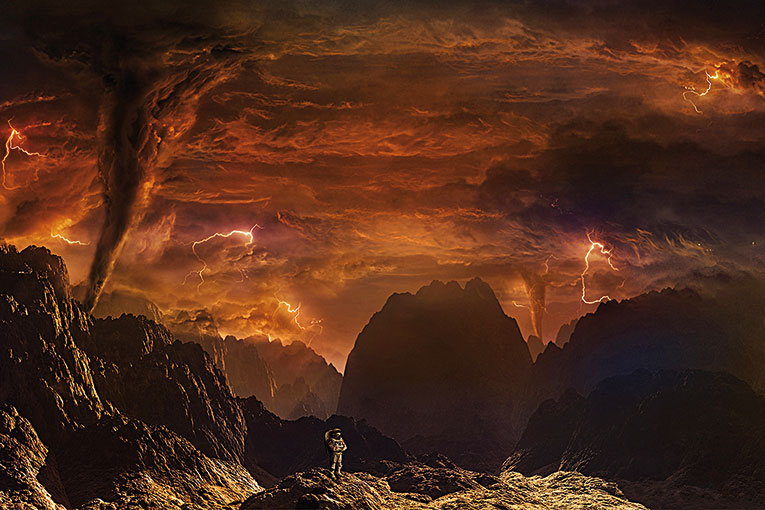 Artistic recreation of the surface of Venus. / Courtesy of Max Mitrofanov

They say that, when the last Venera probe was launched with destination to Venus, two Spanish engineers of the National Institute for Aeroespace Technology were visiting the Bakionur Cosmodrome. One of them, pointing to the rocket, told his colleague: «That probe goes to Venus». It was precisely on another planet where Russian Leonid Ksanfomality would like to be right now, after the stir he caused publishing an article in Astronomicheskii Vestnik claiming that there are forms of life on Venus (Ksanfomality, 2012). In the text, he analyses several videos of the surface of Venus recorded by Venera 13 in 1982, concluding that there are structures that change position and shape. This idea quickly went around the world, and it was given all the possible qualifiers. But is it possible for Venus to be inhabited? What do we know of this planet? 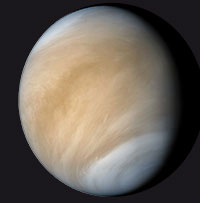 Venus. Composition of images from the Mariner 10. The clouds on Venus are so white that we need special filters to distinguish its structure. / Courtesy of NASA

To begin with, it is the closest thing to hell that exists in the Solar System. It has an atmospheric pressure almost 100 times greater than Earth’s, and a surface temperature of 470 ºC, due to being completely covered by dense clouds of carbon dioxide that produce an out of control greenhouse effect. In fact, it is so marked that the greenhouse effect was first discovered on Venus, rather than on Earth. To complete the picture, storms with thunder and lightning and rains of sulfuric acid (one of the main components of Venusian clouds) are frequent. It is hell, for sure. But does it have demons?

At almost 500 ºC, no complex organic molecule can remain: they break into smaller molecules. The fact that there is so much CO2 in the atmosphere just seems to indicate that there is little carbon in the form of organic molecules on Venus. May there be life based on another type of chemistry? The most likely candidate (due to its abundance and similarity in behaviour to carbon) would be silicon, but the long molecules of silicon are more unstable than their organic analogues. Although silicones (in which silicon atoms are interspersed with oxygen atoms) would be a good alternative; silicones are much more stable and bear high temperatures. But unfortunately, at temperatures higher than 250 ºC they also decompose.

«What has professor Ksanfomality seen in the images of the Venera 13? I am afraid we have a textbook case of pareidolia here or, in other words, of seeing what we want to see»

Besides, another component is needed to speak of a planet’s habitability: a liquid to play the part of a solvent, where the biological reactions could take place. And at 450 ºC, the availability of liquids is rather low. Lead, which melts at 327 ºC, could be a candidate. But there are no lead oceans on Venus. In fact, there are no oceans. In the nineties the Magellan probe made a detailed map of Venus with a radar (since the thick clouds do not let us see the surface) and nothing similar appeared. The liquid surfaces clearly stand out in a radar image, since they do not return the echo and appear as black areas.

According to Ksanfomality, the form marked in yellow is the bottom half of a discoid structure; in the 86th minute it changes shape and texture, and in the 93rd it disappears, to later reappear. Curiously, he does not realise that the same thing happens in the entire image, due to the increase in thermal noise as the probe heats up.

Is Venus inhabited? With all certainty it is not. Then, what has professor Ksanfomality seen in the images of the Venera 13? I am afraid we have a textbook case of pareidolia here, a term meaning «a mistake in perception in which a vague and random stimulus is mistakenly perceived as a recognisable form». In other words, seeing what one wants to see.

Two of the most famous cases of pareidolia had Mars as the protagonist. At the beginning of the twentieth century, Lowell and Schiaparelli thought they saw a complex and extensive network of canals that covered the planet. These canals were structures that were smaller than the angular resolution of the telescopes used, and the brains of the researchers, in such bad conditions of visibility, lined up and connected unconnected structures. Lowell’s conclusion was that Mars was inhabited by a civilisation of canal builders, but when better telescopes were used, the channels disappeared. Another famous case is the face on Mars, a mountain in the Cydonia region photographed by the Viking 1 orbiter in 1976, in which the camera’s poor resolution, along with some dead pixels in the image and the effect of shadows, made the mountain look like a face. The I-want-to-believes turned this picture into an icon of pseudoscience, and it was necessary for the Mars Global Surveyor to take a new high-resolution image in 2011 to quiet the conspiracy talk and prove that it was a mere mountain. Pareidolia is the reason why we see faces in water stains, the Virgin in a cheese sandwich, or Venusians in the images of the Venera 13.

Ksanfomality’s Venusian «appears» in the fourth frame, when there is more noise on the image, and «disappears» in the last. Amazingly, he is not surprised by the sudden appearance in this last frame of several replicas of the pebbles of the lower left corner (in yellow).

And the thing is that, in Ksanfomality’s case, this is not new, as he himself told in an interview in 1975: «I was at the receiving station working with data from the Venera 9 and 10. An object that in the images looked like a “sitting bird” of about 20 cm drew my attention. But geologists called it a “strange rock”. I repeatedly went back to those images and in 1978, in my first research communication book, Planets discovered anew, I spoke of this object as a possible Venus inhabitant. The negative pressure of the administration and my colleagues from the Institute of Space Research partly affected me, of course, but they did not convince me.» Clearly, Ksanfomality has an old obsession with this topic and now, with an already consolidated position, he has decided to jump into the pool.

Obsession is an enhancer for pareidolia and the article in question is a tribute to the absence of rigour. All of it is nonsense and there is no way to salvage it. The «mysterious structures» (see the pictures) appear just when the image (of analogue television) is noisier and has more artifacts. Actually, the real Venusian mystery is why the Astronomicheskii Vestnik journal agreed to publish such an article. In the end, the Venusians have turned out to be snipe hunting. 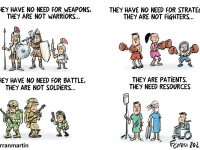