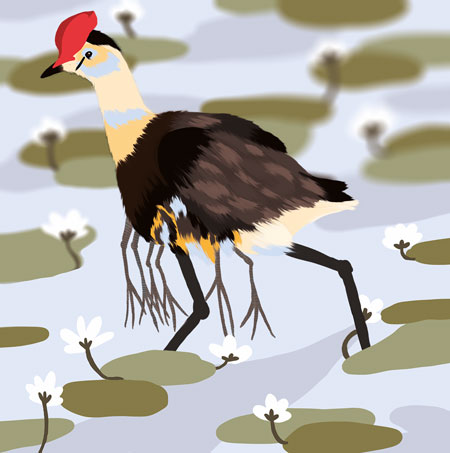 The picture that accompanies the text shows a male comb-crested jacana carrying its offspring. This is a polyandrous species (one female breeds with several males), and its females are larger and more aggressive than males, fighting each other and defending territories with several males, which constitute their personal harem. Each male builds a nest where the female lays four eggs, which the male will incubate until they hatch. Then, the male will take care of them until they are independent (after around three months of paternal care). The reproductive success of the female depends on the number of males with which she mates, and can even kill other females’ offspring to mate with the father.

In most mammals, females take care of the offspring, with few exceptions of «collaborating» males (males are never the main caregivers). Biparental care is observed in less than 10 % of mammals, including humans, and are often associated to monogamous relationships or to species whose offspring is born in a very immature and dependent state (altricial). In contrast, 82 % of bird species are biparental (mostly altricial), 9 % show cooperative breeding (other individuals help the parents), 8 % have the mother as caregiver and only 1 % has the father. In jacanas, parental care is closely related to their mating system: monogamous species are biparental, while in polyandrous species the care is paternal and the female’s involvement depends on the number of males in her harem. Females that have only one male contribute more equally to breeding, but even the least involved mothers may face a predator to facilitate the escape of the father with their offspring.

«In jacanas, parental care and the female’s involvement depends on the number of males in her harem»

In many fish families, parental care simply does not exist: females and males release their gametes into the water and the eggs develop without further parental involvement. However, in species with parental care (20 %), males tend to be very involved (more than 50 % paternal care), compared to 30% maternal and 20 % biparental). One explanation for this is the possibility of desertion. When the care provided by an individual is sufficient and necessary, the caregiving sex is the one with the least chance of escaping. Most fish have external fertilisation: the female deposits the eggs first, which gives her a few seconds advantage and allows her to drop out. In fish, we find the most extreme form of paternal behaviour: male seahorses incubate eggs inside their bodies and give birth to fully developed offspring (viviparity). Viviparity has evolved over 150 times in vertebrates, but the seahorse family (Syngnathidae) is the only one showing male pregnancy. Recent studies have shown that the genes involved in seahorses’ gestation are similar to those expressed in the uterus of female mammals, reptiles, and viviparous fish.1 This is a fascinating example of the independent evolution of behaviour mediated by analogous biological mechanisms. Mothers and fathers have many things in common, including biology.