Discovering All the Shades of Green 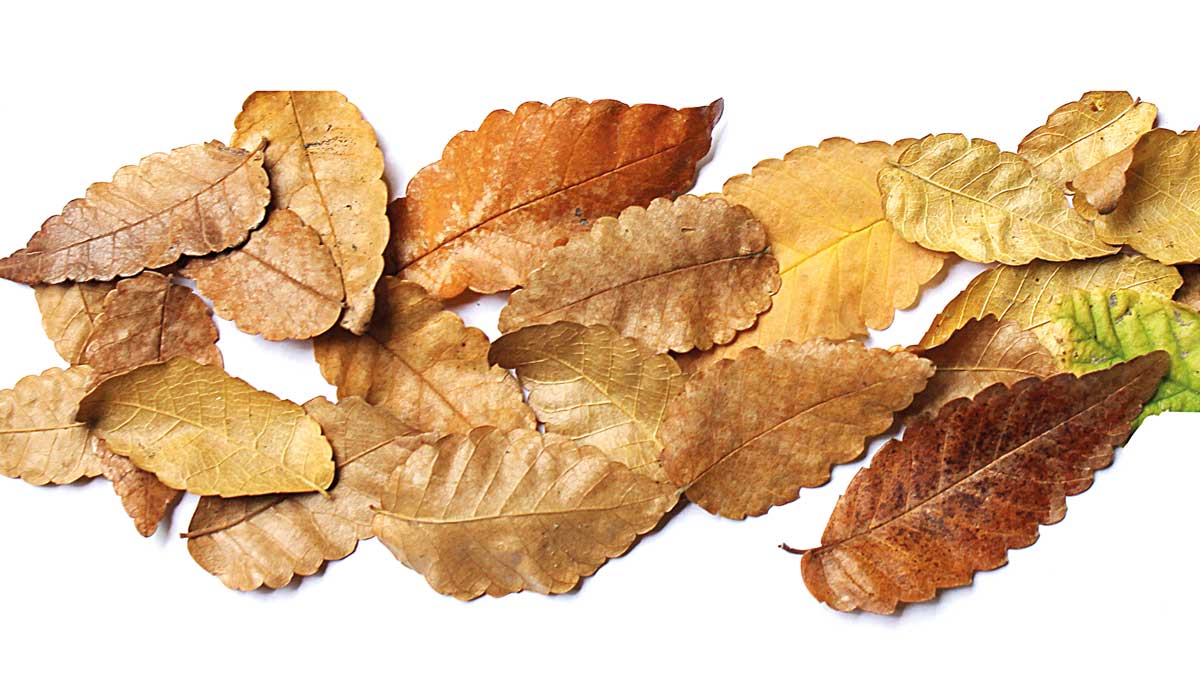 One morning, while I was going to a conference, I gave some simple instructions to make an experiment with some herbs and alcohol. Mr Meig asked:
‘Shall I order the herbs from E. Merck-Darmstadt?’
I drove my partner to one of the windows of our workroom, overlooking the green courtyard of the former Botanical Garden, and pointed at it.

As described by Richard Willstätter, who was awarded a Nobel Prize in Chemistry for his research on the field of plant pigments, especially chlorophyll, in 1915, we also use greens from spinach, acanthus, etc. to extract their chlorophyll in a workshop called «The colour of leaves». We have performed this experiment in front of around 50,000 students aged between five and twelve approximately, in over fourteen years. With crushed leaves, alcohol and filter paper, we can see how in a few minutes plant pigments start moving about through the filter paper. We have known this molecule for over a century, and its name is known since Caventou and Pelletier published Notice sur la matière verte des feuilles (News on the green substance in leaves), in 1818, where they named this compound with the name we still use today: «The green substance of plants […] for which we propose the name of chlorophyll».

This name, chlorophyll, was the result of combining khloros and phyllon, Greek for «greenish yellow» and «leaf». Khloros is also the origin for the name of the chemical element chlorine for the same reason (its colour). 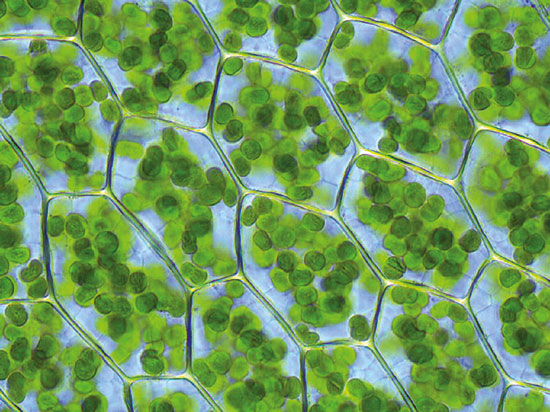 The image above shows the chloroplasts present in plant cells. / Photo: Kristian Peters

The activity we propose is really simple and the groups who visit us demand it. That is why this journal is an excellent vehicle for its diffusion.

This workshop was developed in order to study autumn, but the striking coloration of this season does not actually appear until early December at the Botanical Garden of the University of Valencia. Another characteristic is that the leaves, in the absence of cold, look as if they needed water and have lost its reddish colours which are characteristic of cold temperatures as well as the light intensity of red colours.

These are the effects, maybe soft ones, of a climate change that plants can detect and express the way they are able to do it. The dramatic colour contrasts in plants are now faint memories of the past, and the softness of the colours no longer impresses visitors the way it used to. A yellow ginkgo, a red zelkova, a tricolor sapindus, have they become only pictures to remember?

Elsewhere, the Nobel laureate tells us that he had found two very similar forms of the molecule, but not exactly the same one, which he called chlorophyll a and chlorophyll b. The first one was bluish green and the second one, greenish yellow. When mixed in large quantities, the resulting colour was the green hue characteristic of chlorophyll, which could be seen in chloroplasts… But chlorophyll, obviously, was not green, but a mixture of the two.

Chlorophyll a absorbs light at wavelengths longer than chlorophyll b, so that together account for a good portion of the solar spectrum. And they only leave a good hole in the middle of the unabsorbed visible spectrum, namely green. This is why we see the mixture in green. Why not absorb the entire visible spectrum and therefore be black? We do not know, but remember that biological evolution is unplanned and what exists is not always the best solution. 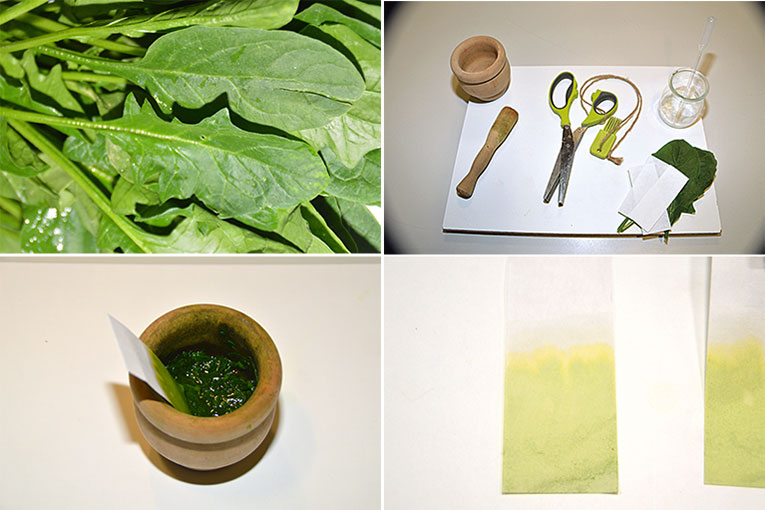 For the activity of extraction of chlorophyll you need: Green leaves (first image) scissors, a mortar, alcohol and filter paper (second image). Cut the leaves, mash them in the mortar, add alcohol and stir. Add the filter paper without sinking it completely (third image) and see how it absorbs the plant pigments (bottom right image). / Photo: Teaching Team

Add the leaves in the mortar. In the Garden we have recently bought wooden mortars, as the children usually damaged more fragile mortars while whipping their leaves. We have also decided to start each activity with the analogy of an orchestra waiting for the conductor’s command to start playing their music. Thus, the Teaching Laboratory becomes a resounding scientific space.

Then add a little alcohol and stir until liquid green.

Then put the filter paper being careful not to sink it, and after a while you will see that the paper has absorbed the liquid and there is a green line and another yellow one above it. They are the green chlorophyll and yellow xanthophylls. Sometimes we find a line with orange carotenes as well.

To finish, remove the filter paper and watch the different lines: at the bottom we can see chlorophylls b and a, which are larger and do not move. At the top we can see xanthophylls, which are lighter.

This separation method is called pigment chromatography and Russian botanist M. Tswett described it in 1910 when separating plant pigments with a physical process, using alcohol on paper. This method would make pigments move higher up or lower down across the filter paper according to the solubility of compounds. Nothing left but remembering that this pigment is universal in all green plants. You can repeat the experiment with leaves of different colours, because it is a fairly simple activity. Sometimes when children just finish this workshop, talk among themselves and say, «how was your experiment?».  Any future scientists?

Mª José Carrau, Pepa Rey and Olga Ibáñez. Teaching Team of the Botanical Garden of the University of Valencia.
© Mètode 2015.

The team of the Educational Unit of the Botanical Garden of the University of Valencia includes Mª José Carrau, Pepa Rey, and Olga Ibáñez.