Fridtjof Nansen: Science at the Service of Humanity

«The Nansen expedition claimed the most northern position man was ever known to have reached and made outstanding scientific contributions on oceanography, climate, hydrography, ice formation and the study of its fauna»

Born in Christiania, one time name of the present day Oslo, into a family of jurists, Fridtjof Nansen (1861-1930) was a passionate nature lover from a young age. He studied zoology at University and began working at the Museum of Natural History in Bergen, where he started out with research on the nervous system of marine animals, following the teaching of Golgi despite his early inclination and support for Cajal’s neuron theory. Despite his interest in and focus towards laboratory research, it was nature that attracted him most, and between August and October 1888 he embarked upon the adventure of being the first to cross Greenland from East to West, a distance of 500 km, marching on skis; this at a temperature of minus 45 °C. And he remained there throughout the winter to study the life of the Eskimos or the Inuit, the name preferred by them. 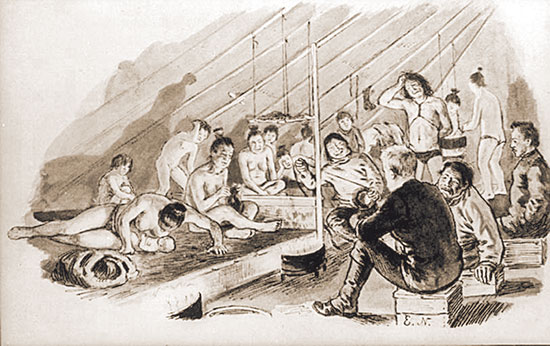 Drawings made by Fridtjof Nansen and his companions during their first expedition to Greenland in 1888 the purpose of which was to study the life of the Inuit.
© Norsk Polarhistorie

Back in Norway, Nansen taught at the Zoological Institute of Oslo and published two books: The First Crossing of Greenland (1890) and Eskimo Life (1891). Shortly after his return, he presented, before the Norwegian geographical society, a project for a maritime expedition towards the North Pole. He conceived it with the purpose of redressing and compensating for the previous failure: that which the ship The Jeanette suffered in an earlier attempt, caused by the force of the ice, crushing the ship. With the funds he succeeded in raising, he ordered the Fram (“Forward”) to be built, a ship designed to withstand the pressure of the ice by rising over it. Preparing for an expedition of two or three years, he ordered fuel, food, scientific documents and instruments to be shipped on board. 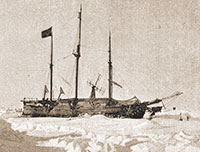 The boat Fram, built by order of Fridtjof Nansen. Designed to withstand the pressure of the ice, Nansen used it during his second expedition to the Arctic.
© Bibliothèque Interuniversitaire de Lettres et Sciences Humaines, Lyon

In 1893, the Fram set sail and was left to drift between the ice flows towards the Arctic on a trip that was to last more than three years. Nansen’s expedition crossed the Arctic Ocean for the first time, discovering the existence of a deep polar basin. After more than a year allowing themselves to drift through the ice, Nansen and his companion Hjalmar Johansen, came to the conclusion that the current would never carry them up to the North Pole and on March 14, 1895 they decided to abandon ship and set out for the North Pole on foot. They had to give up their goal and finally returned to find the Fram in the port of Tromsoe. On September 9th they landed at the port of Oslo, acclaimed by the citizens. Despite not having achieved its goal, the expedition claimed the most northern position man was ever known to have reached and made outstanding scientific contributions on oceanography, climate, hydrography, ice formation and the study of its fauna. Appointed Professor of Zoology and Oceanography at the Royal Frederick University in Oslo, Nansen published six volumes on the expedition and its scientific observations. 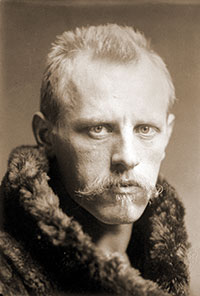 In addition to a remarkable scientific career and as explorer of nature in extreme conditions, Nansen was a fighter for the independence of Norway and, despite his Republican ideology, finally defended the monarchist option for pragmatic reasons. After independence was declared, Nansen was appointed as the first Ambassador of Norway to London (1906-1908), while continuing to participate in oceanic expeditions. During the First World War he was head of the delegation that negotiated an agreement in Washington for the supply of food to areas blockaded by the war and at the end of the conflict he was appointed High Commissioner of the League of Nations arranging the exchange of prisoners and aid to the Russian refugees. He created the Nansen Passport, an international identity document that made possible the release and repatriation of more than 450,000 prisoners. In 1921 he led a campaign of the Red Cross against the hunger crisis that was devastating rural areas of Russia. He also held the post of international mediator in the conflicts between Greece and Turkey and in the war between Armenia and Turkey. On December 10th 1922 he was awarded the Nobel Peace Prize.

An emblematic figure in his country, he had all manner of honours and awards bestowed upon him both before and after his death. The Fram can still be seen in the Museum of the island of Bygdøy near Oslo. The many scientific and personal biographies of Nansen reflect the importance of the scientific spirit he represented and the political and human commitment of science during the critical period of the early decades of the twentieth century.