Electricity and its Audience 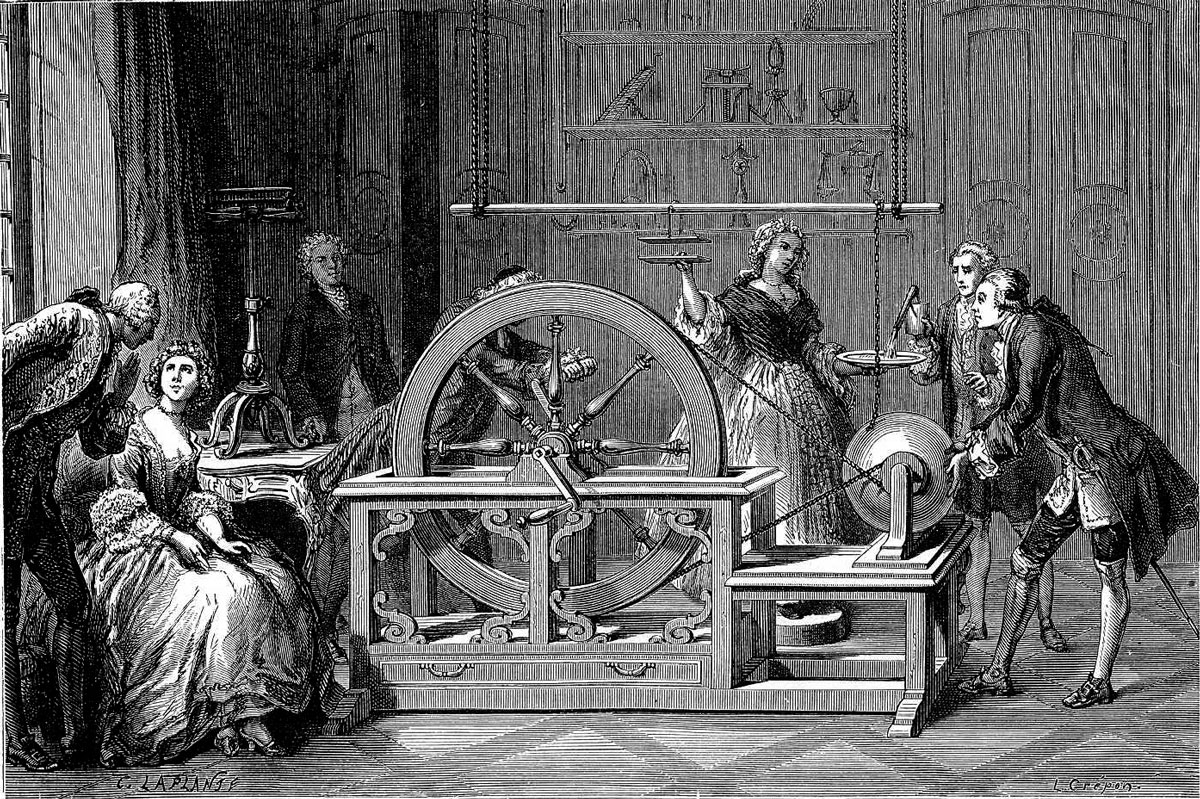 Nollet, a disciple of Cisternay du Fay, enjoyed great success in French salons with his machine that generated spectacular electrical phenomena during the eighteenth century.

Throughout the seventeenth century, public exhibitions of natural phenomena caused or discovered by scientists began to have a major social impact. Prints and paintings of that period show the public dimension of corpse dissection experiences in anatomical theatres, while scientific academies contributed to the promotion of the exhibition of natural phenomena by the new science. This new power of science to unlock the secrets of nature surprised both governors and the powerful. In the London Royal Society, Robert Hooke played an experimental demonstrator role, introducing ​​new observations, new instruments and experimental practices. In this context, Isaac Newton entered the Royal Society in 1672, where he presented a reflecting telescope that could decompose the light spectrum. In British universities, as well as in Holland, France, Germany and other European countries, experimental physics, natural history and medicine achieved great public dimension in and outs academic environments by the late seventeenth century.

«The real technological revolution associated with electricity was developed after the discovery of the dynamic electricity and after the impact of Alessandro Volta’s work, who invented the battery»

The public representation of nature through scientific discoveries reached its peak during the Enlightenment. Under the scope of Physics, experiments on heat and combustion, magnetism and electricity had a great impact. They were not only controversial among scientists but also in the public and political spheres. Electrical phenomena, which were discovered in the wild and were surprising and difficult to explain, were undoubtedly amongst the most popular and spectacular phenomena. Innovations were also introduced throughout the eighteenth century. The electrostatic generator, which had been designed by Otto von Guericke in 1660, was used in public performances by stallholders and fraudsters, in cabinets of physics and in European aristocratic halls. Public and experimental use of electric phenomena contributed to the growth of experimental evidence before there was a scientific explanation. Along with magnetic phenomena, heat or light, public displays of those innovations gave great importance and interest to the study of an explanation of the role of the so-called imponderable fluids: light, heat and electricity, for example, were displayed as an essential part of the phenomena of nature. Newton’s law that revealed gravity force was a paradigmatic example.

The social impact of electricity was enormous. Experiments on testing the effects of electricity in bodies and muscles such as the one in the picture above were very common.

After the electrostatic generator, the most striking finding was the Leyden jar. It was conceived by a German student of that Dutch university, Ewald Jürgen von Kleist. The bottle was trying to find a solution to conserving the electricity after producing it. The possibility of electrifying water was already known, but Kleist’s aim was to preserve the electrified water in a closed bottle. Thus, Kleist and Musschenbroeck built the first electrical capacitor that allowed accumulating power and amplifying its effects by connecting several bottles. Since the mid-eighteenth century, some efforts were concentrated on measuring the intensity of the electric force and those designs and inventions led to discussions between Benjamin Franklin, Henry Cavendish, Charles A. Coulomb and others. At the end of the day, alongside the law of attraction and repulsion between charges outlined by Coulomb at the Académie des Sciences in Paris, electricity reached a similar status to gravity after Newton’s law of universal attraction.

The impact of electricity was immense in terms of social use. In Biology and Medicine, it caused the famous dispute between Volta and Galvani about the existence of an animal electricity responsible for the transmission of nerve impulses. It also originated very early applications of electrotherapy and electrophysiology, and industrial practices applied to telecommunications, such as the telegraph. But the real technological revolution associated with electricity was developed after the discovery of the dynamic electricity and after the impact of Alessandro Volta’s work, who invented the battery. Urban electrification, the application of electricity to means of transport, industrial uses and its various domestic applications were changing the face of cities and the living conditions of families by the late nineteenth century. Since then, we can say that the technology associated with electricity has changed our lives, and we as modern citizens have gone from being admired spectators of nature to be unable of doing nothing without this technology in our daily lives.