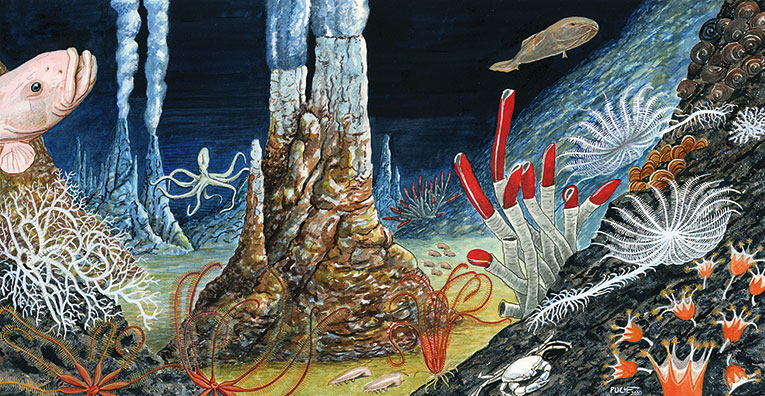 Submarine hydrothermal vents lie along the dorsal ridges of different seas and from which water issues at high temperatures (up to 350 °C), loaded with minerals that solidify in contact with cold water from the atmosphere to form roughly cylindrical chimney structures like in the picture. These are known as «black smokers » because they emit a large amount of hydrogen sulphide that, on coming into contact with seawater, forms pyrite –which is black–. Different groups of animals proliferate in the vicinity of these active vents, living primarily through forming endosymbiotic relationships with sulphur bacteria. Diverse animal groups proliferate in different parts of the world. The first to be discovered –and the best known– are the Vestimentifera (worms) of the species Riftia pachyptila (giant tube worms shown in the illustration). / Carles Puche

The sun formed about 5,000 million years ago. Since then it has been rotating around the Milky Way, which takes around 226 million years. The Sun, like many other stars, has non-luminous bodies orbiting it: the planets. The Earth is clearly distinguishable from its neighbours, with an atmospheric state far from equilibrium, emitting its own light due to volcanoes, forest fires and luminous cities, and having a «living skin». So, how thick is this skin? In his book entitled The Biosphere (1926), Vladimir I. Vernadsky (1863-1945) defined it as the place where life acts as a geological force. Vernadsky raised the same questions we ask ourselves now: How much of Earth is made up by the biosphere? Where are the atmosphere’s bounds? How deep is the ocean? And, is there life within rocks?

The scope of the biosphere

Until the late twentieth century, life was thought to depend exclusively on solar radiation. In the sea, algae and other primary producers could only live at a depth of up to a hundred meters, in the reaches of sunlight. Kilometres down, the few living organisms were forced to subsist on the detritus that fell from the illuminated surface. The seabed was considered flat, uniform and biologically inert, due to the remoteness of the photosynthetic ecosystem and the extreme conditions in these habitats, such as high hydrostatic pressure (1000 atm) or low temperature (between 0 and 4 ºC). The discovery of deep-sea vents in 1977 and the finding of microorganisms living in the deep rocks of the earth’s crust (up to 3 or 4 km deep) a decade later revealed new life-supporting energy sources, independent of light energy from the Sun.

«The discovery of deep-sea vents in 1977 and the finding of microorganisms living in the deep rocks of the earth’s crust revealed new life-supporting energy sources, independent of light energy from the Sun»

Microorganisms with chemoheterotrophic and chemolithoautotrophic metabolism have been found in the terrestrial subsurface. The former get their energy from the hydrolysis of organic compounds, such as oil, while the latter from inorganic chemicals, such as hydrogen or iron. The term lithotroph means «stone eater». Both in the deep rocks and on the surface of the continents many lithotrophic prokaryotes can be found, which are therefore primary producers, and do not need sunlight to live. The discovery of these organisms that can obtain energy from inorganic chemicals and in many cases, like those inhabiting deep rocks, in totally anoxic conditions and at high temperatures, multiplies a thousand-fold the probability of finding life on the rocky planets of the billions of stars in the Milky Way. And our galaxy is just one of possibly billions of galaxies in the known universe.

The deep subsurface bacteria use hydrogen (H2) as the primary electron donor. The three H2 abiotic production systems are the tectonic activity, serpentinization and radiolysis of water. Of the three, the latter seems to make the main contribution in the deepest and oldest regions. Uranium (238U), thorium (232Th) and potassium (40K) are the main sources of natural radiation in sediments. Oxidants, H2O2 and O2, produced during radiolysis, are consumed during iron and sulphur recycling that occurs in these habitats due to the anoxic effect of prokaryotes’ slow metabolism. They are usually bacteria that have very little energy to live and grow very slowly. Recently, at a depth of 2.8 km in a South African gold mine, a single organism has been detected, Desulforudis audaxviator («bold traveller» after the Latin phrase found by the explorers in Jules Verne’s Journey to the Centre of the Earth). Given the characteristics of its genome, this is a thermophilic (optimal temperature ~60 ºC), anaerobic chemolithoautotrophic, nitrogen-fixing and spore forming organism. All terrestrial habitats are characterized by great biological diversity. However, the deep crevices harbouring D. audaxviator represent the only terrestrial habitat to house a single organism, the only «bold traveller» to have reached such depths in its journeying.

Wherever there is the minimum condition to support life, we find microorganisms. What we call extreme environments (deserts, volcanoes, geysers, submarine hydrothermal vents, frozen wastes of the Earth) may be extreme for animals and plants, but not for prokaryotes. For life to appear and remain (as we know it on Earth), three conditions are necessary: the presence of liquid water, availability of essential chemicals and an operative redox system of donors and electron acceptors. The deep subsurface microbiota is independent of solar radiation and can be a useful model in the search for photosynthetic-independent life on other planets, such as Mars or Venus, or satellites like Europa and Titan. The discovery of this deep-living microbiota makes us think that life is the norm in the universe, an inevitable consequence of planetary evolution. And in this new section of the journal Mètode we would like to tell you of its existence and highlight the importance of this «invisible» biodiversity, the incredible and fascinating world of microbes.