The alliance, or even mere complicity, between scientists and journalists is uncommon in our country, thus hampering large-scale scientific dissemination. And the paradox of this non encounter is that both groups voice needs that could be largely satisfied by establishing such a partnership, uncommon hitherto.

Scientists need to popularise their work –communicate their queries, challenges, the social utility of their work, the problems posed and the answers that shed light on them–. They need to air the doubts that research harbours, so they can be understood in appropriate terms. This requires something that has been lacking so far: the public’s support which, ultimately, translates into strong political backing. This is where the necessary resources, both material and financial, come from. In short, they need to break free from the closed circles in which they all too frequently take refuge, and come down from their ivory towers and explain, explain themselves, to the public.

We journalists, on the other hand, are in need of news, novel developments, discoveries, adventures, titanic efforts, mysteries… And are these not the issues that are so often, if not always, interwoven in scientific work? In an ever more technical society, where everyday life is increasingly linked to scientific facts and their consequences, we need to recount this novel and powerful dimension of our reality. And tell it, yes, appealingly, so that it can be understood by those for whom science is a dark territory, complex and unintelligible, taking care, at the same time, not to betray the rigour with which science is constructed.

So, if we are destined to understand each other, why don’t we understand each other? In most cases, scientists and journalists do little to reconcile positions, to understand the other, to find out the other’s fears and difficulties and thus seek ways to help. A few years ago, we embarked upon an initiative to try to build an honest alliance of this kind, with journalists working on the programme Espacio protegido (weekly environmental news programme running since 1998 and lasting 60 minutes, broadcast on Canal Sur 2 – Radio Televisión de Andalucía) and researchers at the Biological Station in Doñana national park (EBD – CSIC Spanish National Research Council). 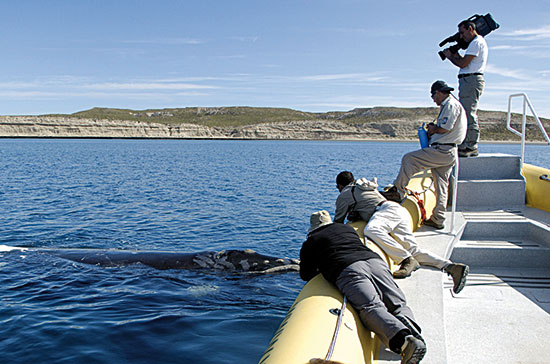 Filming whales off the Valdes Peninsula, while shooting the documentary El sur infinito, while on a scientific expedition to Argentina. / H. Garrido EBD-CSIC

This close relationship, spanning over a decade, logically led to outstanding trust developing and in 2002 we decided to take a step forward and propose a pioneering experience in our country. The director of the Doñana Biological Station (EBD), Fernando Hiraldo and myself, as editor of the programme Espacio protegido (Protected area), posed the following question: could we produce –together and on an equal footing– outreach materials and tools that would be valuable for both? Or, put in another way, could we develop popular science products that would be attractive to TV viewers and, at the same time, be rigorous and useful for scientists?

In order to answer these questions we agreed on a common territory in which to search for a response, a terrain where, a priori, we both felt at home. That common territory proved to be scientific expeditions, to use a term that everyone identifies with easily, although in reality these are trips that must be made, almost daily, by scientists from the EBD to different places in the world within the context of their research projects.

By mutual agreement, we chose those trips combining the interests of the scientific activity itself with other elements capable of enriching television discourse (the variety of work to be carried out, a link with current events or problems in Spain, cooperation with foreign researchers or even the appeal of the natural settings where they work). We created, and this is the most innovative and daring part of the experience, a joint working team, thus giving up the traditional model (a television crew, looking on from the outside, documenting the work of scientists according to their instructions). We agreed on a formula in which all work was done jointly and on an equal footing, from start to finish, from the very design of the trip to the writing and putting together of the final scripts. So as reporters, we had to soak up the conditions under which the scientists’ work was designed and executed, and they also had to put their lives on the line, to cater for our needs and adapt to them.

In short, the idea was to document the expedition as is, from within, in real time, under the same conditions in which it takes place, without dramatizing nor avoiding difficulties, accepting time-outs, the harsh living conditions, failures… Taking advantage of the surprises that may arise, and of the difficulties involved in making a film of this nature, as another element we could capitalize on in terms of instructive «raw material». Faithful to these principles, we also declined to use a large film crew or sophisticated recording systems. Three people (director, producer and camera/sound operator) with a kit similar to any used to televise a simple press conference. 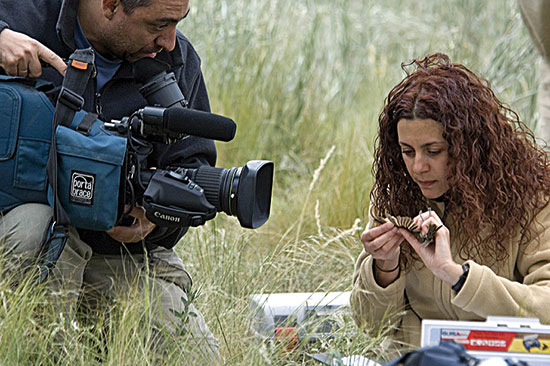 Identifying birds in the Pampa, while shooting the documentary El sur infinito, while on a scientific expedition to Argentina. / H. Garrido EBD-CSIC

Adventure and scientific rigour are not incompatible traits in this original television product. These unusual documentaries emphasize the commitment made by Radio Televisión de Andalucía (RTVA) to popularize science and disseminate projects that seek to gain knowledge and protect our natural heritage, making this endeavour attractive to the general public and, particularly, to younger viewers. Apart from being broadcast on Andalusian public television channels, the documentaries are also available on Internet2 and many schools request their projection for educational purposes.

We focus on an informational product that does not relinquish the element of entertainment but does not allow itself to be hijacked by it. And let’s not forget that all this effort is being made by public institutions. Two seemingly distant institutions, the CSIC and RTVA, have found common ground to educate, disseminate, entertain, inform, surprise and, if I dare say, promote careers in science and journalism.

NOTES:
1. Prize for best Spanish production at the International Festival of Nature and Television. (Back to text)
2. The latest documentary: Planeta Australia: los archivos de la Tierra, can be viewed at this link: <http://www.youtube.com/watch?v=N0tCCBGcc3k> (Back to text) 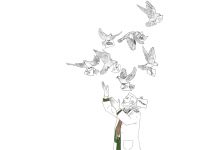 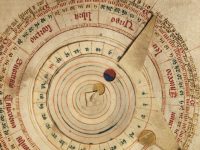 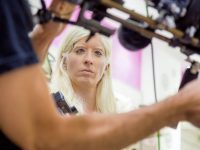 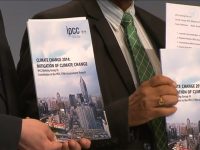