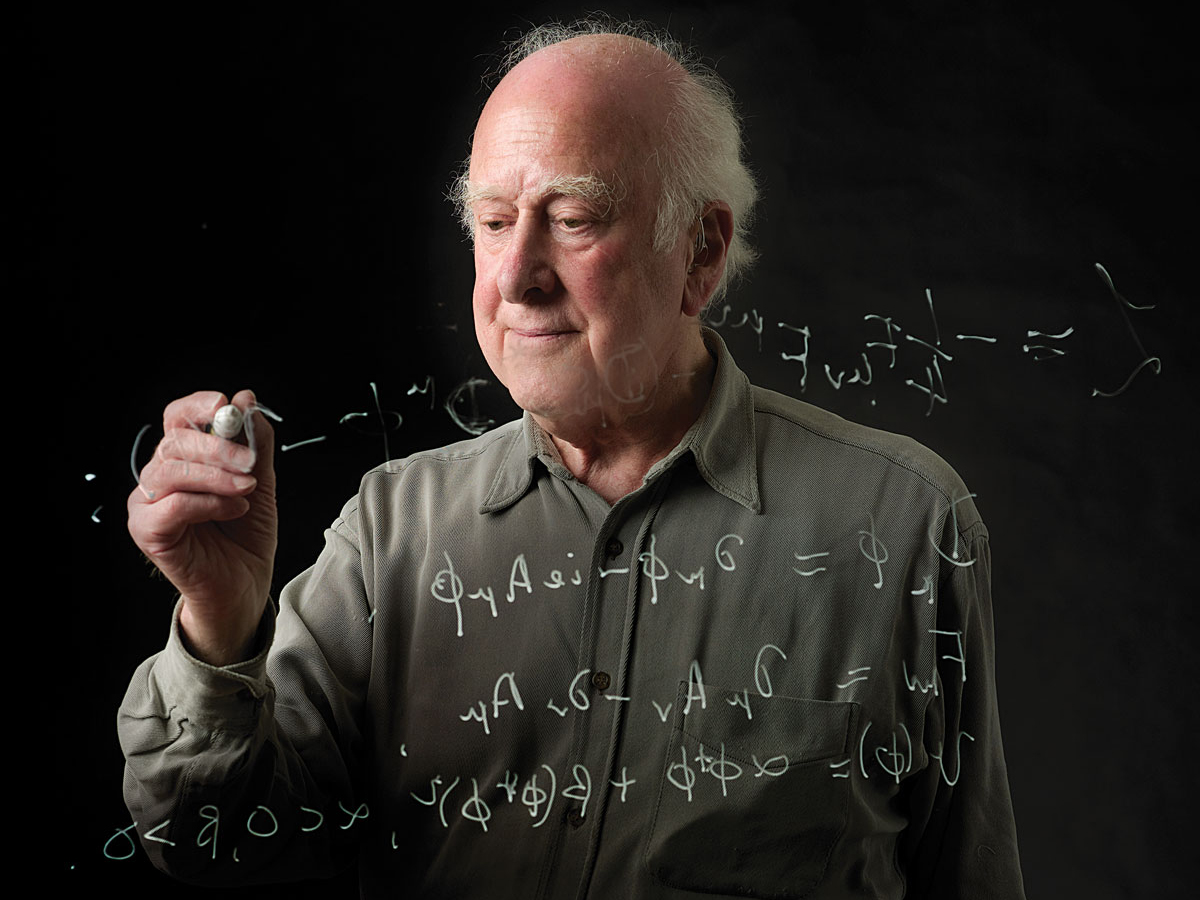 Peter Higgs, the researcher who predicted the existence of the boson which bears his name. / Claudia Marcelloni / CERN, 2008

On the 4th of July 2012, the European Organisation for Nuclear Research (CERN) announced the discovery of a new particle at the Large Hadron Collider (LHC), which is immensely important to our understanding of the structure of matter. Confirmation of the existence of the Higgs boson is as important for fundamental physics as the discovery of DNA was for biology, or the evidence of atomic and molecular structures was for chemistry. Technologically speaking, it represents a milestone comparable to the first man on the moon, but the scientific implications are far more important. Moreover, it is a prime example of international collaboration on a global scale and under European leadership, a joint effort of the whole particle physics research community towards a grand common goal. Four decades of intense scientific work and technological development and achievements have confirmed the existence of a new force field, postulated back in 1964, helping to fit the last pieces of the puzzle into the so-called Standard Model of Fundamental Interactions, and perhaps shed light on new phenomena of an unexpected nature.

«Four decades of intense scientific work and technological development and achievements have confirmed the existence of a new force field, postulated back in 1964, helping to fit the last pieces of the puzzle into the Standard Model of fundamental interactions»

The Standard Model is an extraordinarily neat and predictive conceptual framework which, from simple principles of symmetry, is able to determine the dynamic properties of different interactions. Its predictions have been put to high-precision tests by a large number of experiments, which have confirmed that it is the correct theory of the subatomic world. However, the original formula had a serious flaw, which made it unacceptable: the same symmetries that determine the interactions imply that all elementary particles have zero mass. Although this provides a great theoretical explanation of the infinite reach of strong electromagnetic interactions, which are mediated by massless particles (photons and gluons) travelling at the speed of light, the absence of massive particles would make the existence of the universe as we know it totally unfeasible.

Standard Model interactions are wholly determined by a set of symmetries, defined independently at each point in space-time, called «gauge symmetries». These symmetries imply that the interaction-mediating particles, also called «gauge bosons», have zero mass. Fortunately, there is a mechanism of «spontaneous breakdown» of symmetry, able to generate mass while maintaining the symmetries that fix the interaction. The underlying idea is that some of the symmetries might not be respected by the physical vacuum, and therefore by the spectrum of states obtained, exciting this vacuum. We can find many examples in nature of asymmetric configurations within a symmetric system, for instance, a flock of birds flying in a certain direction «spontaneously» breaks the rotational symmetry of the sky: all directions are equal a priori, but that chosen by the birds becomes special.

The spontaneous breakdown of gauge symmetry was analysed in three papers published in 1964 in the renowned journal Physical Review Letters. The first was authored by the Belgian scientists François Englert and Robert Brout, the second by the Englishman Peter W. Higgs, and the third by the Americans Gerald S. Guralnik and Carl R. Hayan and the English scientist Thomas W. B. Kibble. Using ideas previously applied to superconductivity, these authors showed that when an interaction based on gauge symmetries is combined with an additional force field that spontaneously breaks the symmetry, the gauge bosons can acquire a finite mass. Later, Steven Weinberg and Abdus Salam incorporated this mechanism into Glashow Sheldon’s electroweak theory, thus leading to what we now call the Standard Model.

The Standard Model employs a simple implementation of the spontaneous symmetry-breaking mechanism, introducing a new force field, called the Higgs field, which on interacting with W± and Z generates the mass of these two particles. The Higgs field has the same quantum number as the physical vacuum, no electric charge nor colour charge; therefore, it does not interact with photons and gluons. It is a field that pervades all space-time and slows down the movement of the particles that interact in it, so that these acquire mass. The photons and gluons travel at the speed of light because they are unaffected by the Higgs field and thus remain massless particles. As any quantum field, the Higgs field has its own mediator of interactions, namely excitation in this force field called a «Higgs boson». Self-interaction of the Higgs field also generates mass for the Higgs boson.

The Higgs boson is unstable; it very quickly decays into a particle and its corresponding antiparticle. The most likely decay channel is the heaviest particle in which it can decay and conserve energy. 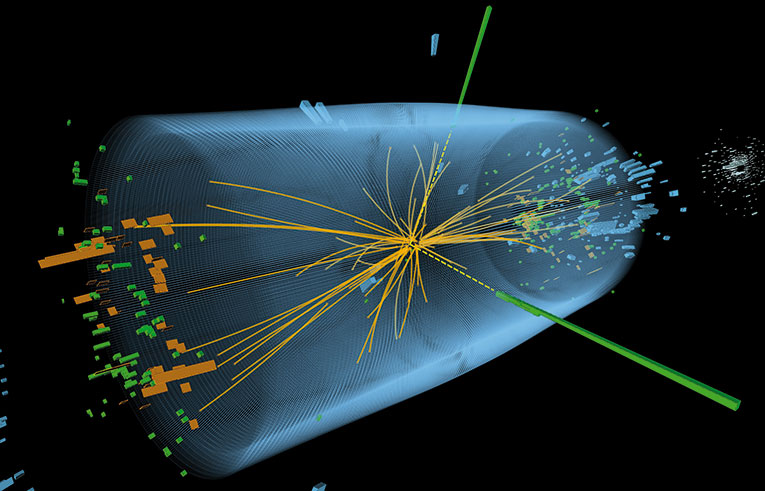 The hunt for the Higgs boson

Given its importance, conceptually speaking, to reveal the possible existence of the Higgs boson has been a goal of high-energy physics for many years. As the theory does not determine the value of its mass, the search for Higgs has been a guessing game, as scientists did not know where (at what energy level) it was to be found. Fortunately, the game rules were very well defined. Fixing a value of the Higgs boson mass, the Standard Model predicts all its properties very accurately. That has enabled us to gradually exclude possible mass regions, as particle accelerators progressively increased the energy available to produce the hypothetical Higgs.

By the late twentieth century, the (negative) data collected at the Large Electron-Positron Collider (LEP) at CERN ruled out the existence of Higgs for masses below 114 GeV (1 GeV is around the mass of a proton). When this energy accelerator peaked, certain anomalous events were observed that could be interpreted by as Higgs boson with a mass just above 115 GeV, but the number of events recorded when the LEP closed was insufficient to draw reliable conclusions.

«The search for Higgs has been a guessing game, as scientists did not know where (at what energy level) it was to be found. Fortunately, the game rules were very well defined»

According to the Standard Model, consistent theoretical considerations also indicated that the most probable mass region should fall between 115 and 150 GeV. Although the energy generated by LEP was too small to produce it, due to quantum effects, a Higgs in this mass range would slightly modify the properties of the Z boson, which the LEP measured very accurately. The data analysis provided convincing evidence that the Higgs was nearby. It could not be seen but it had left its footprints in the data. Unfortunately, we would have to wait another decade to unravel the enigma, that is, until the LHC became operational.

The hunt for Higgs went unrewarded at Fermilab’s Tevatron particle accelerator, near Chicago (USA), which held the world energy record for many years: producing proton and antiproton collisions of 1 TeV (= 1,000 GeV). Although the Tevatron had enough energy to produce the Higgs, the background noise prevented the signal from being identified. As the Higgs boson is unstable, we can only locate its decay products, but these secondary particles are also produced directly and with greater intensity by the collider. It is like looking for a needle in a haystack. After a great deal of effort, the Tevatron only managed to rule out the existence of Higgs in a small mass range, around 160 GeV. In the last year the Tevatron was running, just like at the LEP, there were traces of possible anomalous events between 120 and 130 GeV, but again findings were not reliable enough to draw conclusions.

«It is too soon to categorically state that we have found the Standard Model’s Higgs boson. However, we do know that we made a great discovery; a new force field, different in nature to all others»

The high energy levels reached by the LHC and the impressive sensitivity of its two detectors, ATLAS and CMS, quickly brought the desired goal within reach. At the end of its first year of operation, the LHC had excluded a wide mass region, between 115 and 600 GeV, leaving just a small stretch at around 125 GeV. Thus the Higgs boson was cornered in a very interesting region (several different decay channels can be studied) but also in a difficult region, because the background noise is higher. Finally, in 2012 the two detectors obtained conclusive evidence of the existence of a new particle, having a mass close to 126 GeV, whose decay into two photons was observed, an unlikely channel but with a very clear signal: two high-energy photons. The veracity of the finding has been supported by additional evidence obtained in other decay channels. In physicists’ statistical jargon the evidence obtained has a confidence level greater than 5s (99.9999%), in other words, the probability of error is below 0.0001%, so we can officially call it a «breakthrough». 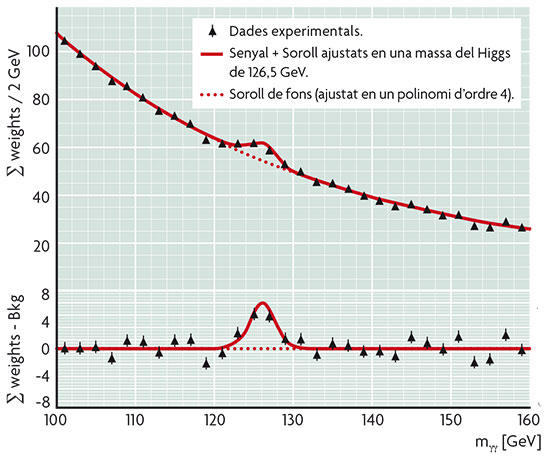 Distribution of «invariant mass» (sum of energies in a frame of reference at rest) of two-photon events, measured by the ATLAS detector (Aad et al., 2012). The peak at 126 GeV shows the existence of a boson decaying into two photons. The top line shows all the events observed including background noise, while in the line below, the noise has been removed. / ATLAS Collaboration

What do we really know?

It is too soon to categorically state that we have found the Standard Model’s Higgs boson. However, we do know that we made a discovery of great importance for physics. We have found a new force field, different in nature to all others. Unlike electromagnetic interactions, strong or weak, it is not a gauge boson. We have discovered something brand new, with the characteristics the Higgs boson should have. If it isn’t Higgs, it certainly looks very like it!

ATLAS and CMS continue to collect additional data at high speed, that is, we will soon have a fair idea of ​​the properties the new particle has. The data currently available fit well with the Higgs we were looking for. If, finally, it does turn out to be Higgs, we will have completed a remarkable chapter in scientific progress, fully confirming the Standard Model. If, conversely, there are discrepancies, the importance of the finding would be even greater, since we would have discovered an object similar to Higgs but with new features, which would reveal the existence of new unknown physics. In any event, after a two-year technical timeout to increase the power of its magnets, the LHC will operate with twice the energy (14 TeV) to continue exploring the frontiers of knowledge.

Spanish science in an international context

The breakthrough recounted here was the result of a collective endeavour, to which scientific institutions from many countries contributed. The Spanish contribution has been outstanding. Our experimental groups have built important parts of the detectors, which have been crucial to the ultimate success of the project. The IFIC (Institute for Corpuscular Physics) team, for example, assumed important responsibilities in the construction of vertex detectors (Silicon Vertex) and the hadronic calorimeter (TiCal) of the ATLAS. In recent years, the Spanish groups have been coordinated by the National Centre for Particle, Astroparticle and Nuclear Physics (CPAN), based at the IFIC, ensuring the necessary scientific and technical assistance for everything (detectors, computer processing and data analysis) to work smoothly. Just one small –and little known– fact shows the leadership achieved: in 2012, year of the discovery, the ATLAS and CMS collaboration boards were chaired by two CPAN scientists: Martine Bosman (IFAE, ATLAS) and Teresa Rodrigo (IFCA, CMS). For once, Spanish science has been at the forefront of a great scientific discovery.